Ok...so I know that this totally not book-related in any way, but when one of my co-workers told me it was Jon Bon Jovi's birthday today (which she learned on the radio), I figured that I needed to help him celebrate it somehow!

It was almost a year ago now since I decided to head to St. Paul to see Bon Jovi in concert and it was probably the best concert I have ever attended! Woohoo...Rock on Jon! Here is a pic from the concert: 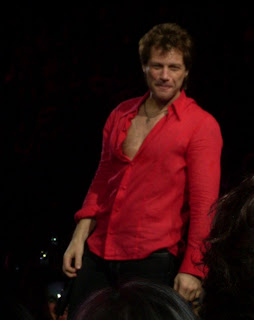 Ya know...I can't share just one pic, so here is another one: 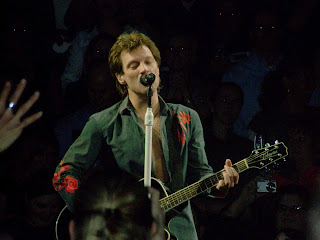 I adore him. Livin' On a Prayer is like my favorite song evah!

This made me LOL .....what a Jon Bon freak you are! Happy Birthday Jon! Thanks for the giggle Jo Jo!

I love this! Thanks for posting -- I had no idea.

So funny! And I love the photos!

And please note...that pic with the red shirt...of course he is looking right at me! lol

Back in high school (the 80's) I got to go backstage and meet the birthday boy, big hair for both of us. I've got the pic around here somewhere. He has definitely aged well :)