A couple of books have caught my eye this week. The first one is The Devil's Company by David Liss that I spotted over at A Bookworm's World(you can also enter to win a copy there). 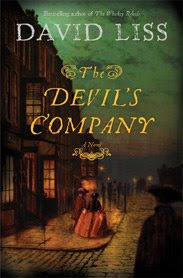 Here is what The Devil's Company is about from David Liss' website:

The year is 1722. Thief-taker, ex-boxer, “ruffian for hire,” and master of disguise, Weaver finds himself caught in a deadly game of cat and mouse, pitted against Jerome Cobb, a wealthy and mysterious schemer who needs Weaver’s strength and guile for his own dark purposes.

Weaver is blackmailed into stealing documents from England’s most heavily guarded estate, the headquarters of the ruthless British East India Company, but the theft of corporate secrets is only the first move in a daring conspiracy within the 18th century’s most powerful corporation. To save his friends and family from Cobb’s reach, Weaver must infiltrate the Company, navigate its warring factions, and uncover a secret plot of corporate rivals, foreign spies and government operatives. With millions of pounds and the security of the nation in the balance, Weaver will find himself in a labyrinth of hidden agendas, daring enemies and unexpected allies.

Another book that I have seen popping up here and there is A Change in Altitude by Anita Shreve. I haven't read any reviews of this one yet, but she is one of my favorite authors so I know that I will want to get my grubby paws on this one. This book was first revealed to me by a couple of Mailbox Monday posts from Diary of an Eccentric and Savvy Verse and Wit. So ladies, I am green with envy over this one!

I had to search pretty hard for a summary of this book, but I finally found one at the UK Division of the Little, Brown Book Group:

Newlyweds Margaret and Patrick set off on a great adventure -- a year living in Kenya in a dizzying and sometimes dangerous city. Shuttling between expat suburbs and squalid shantytowns, Margaret realizes there is a great deal she doesn’t know about the complex culture of her new home, and about her husband.

The newlyweds eagerly take part in a climbing expedition to the summit of Mount Kenya. But during their arduous ascent a horrific accident occurs. In its aftermath, Margaret struggles to understand what happened on the mountain and how it has transformed her and her marriage, perhaps for ever.

When small actions have unintended, catastrophic consequences, where does responsibility lie, and can blame ever truly be laid to rest? With stunning language and striking emotional intensity, A Change in Altitude illuminates the inner landscape of a couple, the irrevocable impact of tragedy and the elusive nature of forgiveness.

Anita Shreve is one of my very favorite authors and you can see a list of her complete works at her website.

So what caught your eye this week?

A Change in Attitude sounds great, but I still have Testimony to read. (It's been in the TBR pile for a while) Have you read Testimony? If so, what did you think?

I've never read anything by Anita Shreve, but I've got several of her books on my TBR pile. A Change in Altitude sounds interesting - might have to add that one, too!

Jess: I STILL haven't read Testimony! It's on my pile at home but I just haven't had a chance to crack it open yet.

Joy: I've read a few and my favorites so far are The Pilot's Wife and Sea Glass.

Here are my Friday Finds

Ooh, you found a description for Shreve's latest book! I looked for one and couldn't find it. Thank you! I'm looking forward to reading that one (even though I didn't like Testimony, I'm still a fan!).

I have the ARC of A Change in Altitude, which I may have to move to the top of my pile.

The Devil's Company is definitely one that I would like to read.

I love Anita Shreve and have read all of her novels (although I have been disappointed in the last few). Is A Change in Altitude a new book that has been published first elsewhere? I'm intrigued!!

The Devil's Company looks like my kind of book!

I've read a few Shreve books but not this one. Is it new? I'll check it out. Nice finds.

The Liss books does sound good. So many books, so little time. Hope you entered the giveaway. Thanks for the link

Both of those books look good!

Great finds Jo-Jo. I'd like to read both of these!

The Devil's Company sounds great. Plus I can't resist that cover!