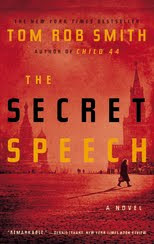 Thanks to Valerie  from Hachette I am able to offer up to three copies of this book away on my blog! The Secret Speech would make an excellent bok club selection as the paperback edition will feature a Reading Group Guide that includes a Q&A with Tom Rob Smith and discussion topics and questions. Here is a summary of The Secret Speech by Tom Rob  Smith from the Hachette website:

Soviet Union, 1956. Stalin is dead, and a violent regime is beginning to fracture-leaving behind a society where the police are the criminals, and the criminals are innocent. A secret speech composed by Stalin's successor Khrushchev is distributed to the entire nation. Its message: Stalin was a tyrant. Its promise: The Soviet Union will change.

Facing his own personal turmoil, former state security officer Leo Demidov is also struggling to change. The two young girls he and his wife Raisa adopted have yet to forgive him for his part in the death of their parents. They are not alone. Now that the truth is out, Leo, Raisa, and their family are in grave danger from someone consumed by the dark legacy of Leo's past career. Someone transformed beyond recognition into the perfect model of vengeance.

From the streets of Moscow in the throes of political upheaval, to the Siberian gulags, and to the center of the Hungarian uprising in Budapest, THE SECRET SPEECH is a breathtaking, epic novel that confirms Tom Rob Smith as one of the most exciting new authors writing today.


Now on with the giveaway!

I will be giving away one book for every 10 entries with a maximum of three books to give away.

You will have until May 22nd to enter and I will draw for winners on May 23rd.

This Giveaway is closed.
Posted by Jo-Jo at 7:46 AM

I would love the chance to read this book. Thanks for the giveaway!

This sounds like it would be a good one. Please enter me for this one.

Count me in please

I'd love to win this book. I liked Child 44 and I think this will be a good sequel.

This really does sound like a great read!! Thanks for the chance to win a copy!!

Please include me! Thanks!

I'd a love a chance to win and read this! Thanks!
JHolden955(at)gmail(dot)com

I found your review to be intriguing and one that I think I would take pleasure in reading. Thank you so much for hosting this giveaway.

Sounds good! Thanks for the giveaway.
mtakala1 AT yahoo DOT com

chocolate and croissants at yahoo .com

What a thriller and espionage filled book. I have always been intrigued by the Russian governmental chaos and this book promises to maintain that mystery alive. Please enter me in the giveaway.

Thanks for the giveaway.
mtakala1 AT yahoo DOT com

This sounds like a unique and interesting book. Please enter me in your giveaway!