Audiobook Review: When Will There Be Good News? by Kate Atkinson 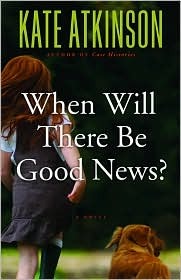 Here is a summary of the book from Kate Atkinson's website:

In rural Devon, six-year-old Joanna Mason witnesses an appalling crime. Thirty years later the man convicted of the crime is released from prison.

In Edinburgh, sixteen-year-old Reggie works as a nanny for a G.P. But Dr Hunter has gone missing and Reggie seems to be the only person who is worried.

Across town, Detective Chief Inspector Louise Monroe is also looking for a missing person, unaware that hurtling towards her is an old friend -- Jackson Brodie -- himself on a journey that becomes fatally interrupted.

My Review:
This was an audiobook that started out with a punch as it details a crime that is witnessed by young Joanna.  After the unfortunate incident the book fast forwards to the life of an adult Dr. Joanna Hunter, who for some reason appears to be missing.  But is she really missing, or is she just visiting a sick aunt as this is what her husband is telling people.

As indicated in the summary, Reggie is a 16 year old girl that works for Dr. Hunter.  I must admit that I really was under the impression that Reggie was much younger than this as I was listening to the book.  I was thinking that she was maybe 11 or 12 years old, just from the odd jobs that Dr. Hunter hired her to do and from how she came up with her conclusions.  She didn't seem to get along with or trust Dr. Hunter's husband, so she finds it curious when he tells her that Dr. Hunter went to visit her aunt.  After a little bit of investigating she decides that Dr. Hunter never would have left town in the manner that it appears she did.

Jackson Brody is an interesting character that has found himself involved in various police investigations throughout his career.  He is intrigued although a bit skeptical when young Reggie decides to report Dr. Hunter as a missing person.  Why would a babysitter be reporting her as missing rather than her husband?

All events seem to come full circle in this novel.  Is someone trying to finish off the job of Joanna Hunter that was left incomplete from years ago, or is her disappearance revolving around a new set of circumstances?  She possibly could have just went to visit a sick aunt.  This book does leave you wondering, stringing you along until the very end.  Ellen Archer is the narrator of this novel and for some reason I just did not find myself immersed in her voice and the story.  This was an interesting story, but as an audiobook it did fall a bit short for me.

Disclosure:  I borrowed this book from my local library and listened to it for my own entertainment.

You can check out more great reviews over at Cym Lowell's Book Review Party Wednesday!
Posted by Jo-Jo at 7:44 AM

So many people love the Jackson Brody books. I read the most recent one and felt about the same way you did.

I've been wanting to start this series.

Great review. Do you think reading it in print would have made a difference?

The title intrigued me and I was really looking forward to a good read. The storyline really dragged along and though I tried to stay with it for over 150 pages, i just could not finish. I hate to move a book into the archives that I have not finished, but other books on my list were 'calling me' to get to them.