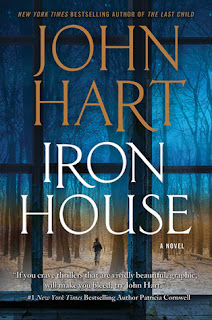 Here is a summary of Iron House from the Macmillan website:


HE WOULD GO TO HELL
At the Iron Mountain Home for Boys, there was nothing but time. Time to burn and time to kill, time for two young orphans to learn that life isn’t won without a fight. Julian survives only because his older brother, Michael, is fearless and fiercely protective. When tensions boil over and a boy is brutally killed, there is only one sacrifice left for Michael to make: He flees the orphanage and takes the blame with him.

TO KEEP HER SAFE
For two decades, Michael has been an enforcer in New York’s world of organized crime, a prince of the streets so widely feared he rarely has to kill anymore. But the life he’s fought to build unravels when he meets Elena, a beautiful innocent who teaches him the meaning and power of love. He wants a fresh start with her, the chance to start a family like the one he and Julian never had. But someone else is holding the strings. And escape is not that easy. . . .

GO TO HELL, AND COME BACK BURNING
The mob boss who gave Michael his blessing to begin anew is dying, and his son is intent on making Michael pay for his betrayal. Determined to protect the ones he loves, Michael spirits Elena—who knows nothing of his past crimes, or the peril he’s laid at her door— back to North Carolina, to the place he was born and the brother he lost so long ago. There, he will encounter a whole new level of danger, a thicket of deceit and violence that leads inexorably to the one place he’s been running from his whole life: Iron House.

My Review:
I have found that I usually do not like to read books from the mystery/suspense genre, but listening to them is a different story!  I love the action that these stories provide for my listening pleasure.  I have read several great reviews from other bloggers who read this book, so I was looking forward to it.  I have to tell you that the audioversion fell a bit short for me though.

Michael and his younger brother Julian were raised at an orphanage in a remote community in North Carolina.  When Michael flees the orphanage to make a life of his own, Julian stays on and is eventually adopted by a family that holds substantial political influence.  Although Julian grows up with a privileged lifestyle, the ghosts of the Iron House orphanage will haunt him forever.

Michael starts his life over in New York City and finds himself in a lucrative career within the circle of organized crime.  A life containing all of the crime and deceit can only last so long, and when it is over, it ends quickly.  Michael eventually flees the city and returns to the only home he has ever known in a quest for answers.  Little does he know that he will unravel secrets that were never meant to revealed from years ago.

So this audiobook had a great plot, but like I said, it just didn't measure up for me.  I found my attention wandering quite often and although I was able to get caught up with the family drama between the two brothers, there were still parts of the book that I missed and just didn't understand certain parts of the storyline because of that.  With themes family, love, and crime, this story may be of interest to fans of the thriller genre.

This book is very popular around here. I'm sorry you didn't love it.

Oh wow what a shame. It sounds fabulous from the blurb. I think I might give it a try anyway.

This is the first book that I read authored by John Hart and it won't be my last. I intend to read his previous novels and his future ones as well. The book had non stop action. Twists and turns were plentiful. Ending was plausible despite certain realities but then this is fiction.