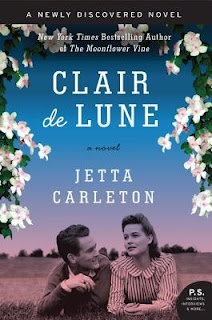 Here is a summary of the book from the Harper Collins website:
An unexpected treasure: A long-lost novel of innocence threatened, by the author of the beloved classic The Moonflower Vine

The place: southwest Missouri, on the edge of the Ozark Mountains. A young single woman named Allen Liles has taken a job as a junior college teacher in a small town, although she dreams of living in New York City, of dancing at recitals, of absorbing the bohemian delights of the Village. Then she encounters two young men: George, a lanky, carefree spirit, and Toby, a dark-haired, searching soul with a wary look in his eyes. Soon the three strike up an after-school friendship, bantering and debating over letters, ethics, and philosophy—innocently at first, but soon in giddy flirtation—until Allen and one of the young men push things too far, and the quiet happiness she has struggled so hard to discover is thrown into jeopardy.

My Review:
This book started out a little slow for me, but I am so glad that I stuck it out as I found a new love and appreciation for the characters as the story developed.  Young Allen isn't sure what to do with her life, but knowing that she needs to find a job to satisfy her debts, she lets her mother talk her into becoming a college professor at a small private institution.  Her dreams are put on hold as she enters the world of higher education.

Allen is probably one of the youngest faculty members at the junior college where she has been hired.  She lets her love of literature lead the way for her life in teaching and even thinks of ways that she could excel in this department.  Considering that she isn't much older than some of her students, she finds it easier to build friendships with them rather than her fellow peers.  Later in the novel, these friendships will make Allen the subject of an academic witch hunt, giving her the opportunity to re-evaluate her priorities.

As Allen dodges academic failure, she easily falls into a pattern and lifestyle that would benefit anyone striving for a successful teaching career.  But will these temporary goals deter her from her true dreams of becoming a writer herself?  How can she fulfill her own desires as she struggles through life trying to do something she doesn't truly love?

I enjoyed this novel that also had a nervous edge to it as the U.S. is getting ready to enter World War II.  I found the writing beautiful and almost poetic at times, and with themes of war, love, friendship, and dreams, you may want to pick this book up yourself.  I don't hesitate in recommending this novel.

Disclosure:  This e-book was provided to me by the publisher through the Netgalley program in exchange for an honest review.

Since I work at a university you'd think I'd avoid books that center around a university setting but I really enjoy academia. I'm not sure this one is for me. It seems a tad too romantic for my liking.

I've heard good things about this book. It's on my to read list. I'm glad you enjoyed it.

It sounds like this ended up being a real page turner.

I've heard good things about this book, and reading your review has me putting it on my to-read list. You know I love reading books set during that time!

I'm glad you stuck with this one - sounds like it was really worth it once you got into the story.

Thanks for being on the tour!

I loved this one too. It did start out a bit quietly, but I loved the atmosphere.