Audiobook Review: Bring Up the Bodies by Hilary Mantel 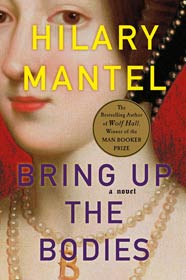 Title:  Bring Up the Bodies


Though he battled for seven years to marry her, Henry is disenchanted with Anne Boleyn. She has failed to give him a son and her sharp intelligence and audacious will alienate his old friends and the noble families of England. When the discarded Katherine dies in exile from the court, Anne stands starkly exposed, the focus of gossip and malice.

At a word from Henry, Thomas Cromwell is ready to bring her down. Over three terrifying weeks, Anne is ensnared in a web of conspiracy, while the demure Jane Seymour stands waiting her turn for the poisoned wedding ring. But Anne and her powerful family will not yield without a ferocious struggle. Hilary Mantel's Bring Up the Bodies follows the dramatic trial of the queen and her suitors for adultery and treason. To defeat the Boleyns, Cromwell must ally with his natural enemies, the papist aristocracy. What price will he pay for Anne's head?

My Review:
I've always enjoyed historical fiction that gives us a glimpse into another place and time.  The politics surrounding Anne Boleyn and her rise to power made for a most interesting storyline that is told to us through several viewpoints.

Henry has pushed Katherine aside and left her alone to die, while Anne has eased herself into the role of queen.  It does not take Henry long to tire of Anne, allowing him to wonder if she used her feminine wiles to give herself more power.  When he starts to question her loyalty he finds a new attraction to Jane Seymour.

Knowing that his country would frown if he discarded Anne as he did Katherine, he enlists the help of his assistant, Thomas Cromwell.  They must find, or create, some evidence that would make the King's disposal of Anne acceptable to the public.  Once Henry is free from the grasp of Anne, he will be able to pursue the young and innocent Jane Seymour.

As I indicated earlier, I really enjoy historical fiction, but I did not listen to the first book in this series, Wolf Hall, before listening to this one.  It makes me wonder if I would have enjoyed this one more if I had listened to Wolf Hall first.  Or possibly I should just stick with "reading" historical fiction rather than "listening" to it.  As much as I enjoyed listening to Simon Vance narrate this novel, I couldn't keep my mind from wandering throughout most of it.  Although I am not going to highly recommend this novel, I am not going to write it off.  I think I am going to try to get my hands on an audio version of Wolf Hall and  see if that turns out any better for me.  If it does, I may have to give this one a go once again!

Disclosure:  This book was provided to me by the publisher from Audiobook Jukebox in exchange  for an honest review.

I know a lot of people who've loved this book but I don't think it's for me.

This book is not for me. Nor was the first one. I just had no interest in it!

I love historical fiction too. I feel so bad for Henry's wives. When I think of the years I've had with my husband, I feel bad that those ladies missed out on safety, security, friendship, and a rewarding relationship. Makes me glad I married a poor (compared to Henry)man.