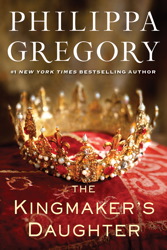 
Here is a summary of the novel from the Simon and Schuster website:

The Kingmaker’s Daughter is the gripping and ultimately tragic story of the daughters of the man known as the “Kingmaker,” the most powerful magnate in England through the Cousins’ Wars. In the absence of a son and heir, he uses the two girls as pawns in his political games, but they grow up to be influential players in their own right. In this novel, her first sister story since The Other Boleyn Girl, Gregory explores the lives of two fascinating young women.

At the court of Edward IV and his beautiful queen, Elizabeth Woodville, Anne grows from a delightful child brought up in intimacy and friendship with the family of Richard, Duke of Gloucester, to become ever more fearful and desperate when her father makes war on his former friends. Her will is tested when she is left widowed and fatherless, with her mother in sanctuary and her sister married to the enemy. Fortune’s wheel turns again when Richard rescues Anne from her sister’s house, with danger still following Anne, even as she eventually ascends to the throne as queen. Having lost those closest to her, she must protect herself and her precious only child, Prince Edward, from a court full of royal rivals.

My Review:
I have to admit that I was hesitant to listen to this historical fiction novel after the last one totally missed the mark with me.  Not so with The Kingmaker's Daughter by Gregory!  I absolutely loved this novel and the narrator, Bianca Amato, gave me a vivid picture of our heroine Anne, by embracing her character in every way.

The story opens with Anne and Isabel as young girls, clueless as to what their father has planned for their futures.  Their father, Richard Neville, is a politically powerful man, who decides the fate of the individual that will sit on the throne.  Not only has he put men on the throne, but he has been responsible for removing kings from the throne as well.

As the girls get older they have the opportunity to visit the court of King Edward and Queen Elizabeth.  Anne is fascinated by the beauty of the Queen, admitting that she has never set eyes on anyone more beautiful.  When Anne and Isabel decline the Queen's offer to join her court as maids in waiting, the Queen develops an anger for these two girls that will continue for the the rest of their lives.

When Isabel marries King Edward's brother, George, the Queen dislikes the girls even more, knowing that if anything were to happen to Edward, Isabel and George could take over the throne.  Isabel develops a fear towards the Queen when she convinces herself that both the Queen and the Queen's mother know how to practice witchcraft and they probably put a curse on both herself and Anne.  Anne tries to discount Isabel's claims, but eventually these thoughts will consume her also.

After all the political struggles between several countries, Anne finds herself married to the King's younger brother, Richard, who she hoped to marry years before but the Queen would not allow it.  I cheered when Anne was finally going to have a bit of happiness in her life.  It doesn't take long after their marriage, for the Queen to self-destruct and lose her position on the throne, leaving Anne and Richard as the King and Queen of England.

I didn't realize that this is the fourth novel in the series until after I had started it.  I did not feel lost in the novel because of this, but it does make me want to read the other books that precede this one.  This novel contains so much more than what I have listed above.  Anne and Isabel's sisterly relationship is compromised at one point, and it is a hard journey for them to find their way back to one another.  With themes of sisters, love, power, and loyalty this was an amazing novel to listen to and I highly recommend it!

Disclosure:  This audiobook was provided to me by the publisher through Audiobook Jukebox in exchange for an honest review.

I just don't enjoy reading about that time period for some reason, so this book probably isn't for me.

A rating of 5 from you is high praise. This book sounds really good and you did a nice job with the book review. I'll keep an eye out for this book at the library.

I enjoy historical fiction when I'm in the right mood. Glad you enjoyed this one!