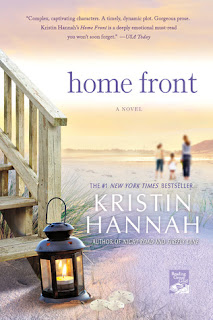 Here is a summary of the book from Kristin Hannah's website:

In her bestselling novels Kristin Hannah has plumbed the depths of friendship, the loyalty of sisters, and the secrets mothers keep. Now, in her most emotionally powerful story yet, she explores the intimate landscape of a troubled marriage--with this provocative and timely portrait of a husband and wife, in love and at war.

All marriages have a breaking point. All families have wounds. All wars have a cost…

Like many couples, Michael and Jolene have to face the pressures of everyday life—children, careers, bills, chores—even as their twelve year marriage is falling apart. Then an unexpected deployment sends Jolene deep into harm’s way and leaves defense attorney Michael at home, unaccustomed to being a single parent to their two girls. As a mother, it agonizes Jolene to leave her family, but as a soldier she has always understood the true meaning of duty. In her letters home, she paints a rose-colored version of her life on the front lines, shielding her family from the truth. But war will change Jolene in ways that none of them could have foreseen. When tragedy strikes, Michael must face his darkest fear and fight a battle of his own--for everything that matters to his family.

At once a profoundly honest look at modern marriage and a dramatic exploration of the price of war on an ordinary American family, HOME FRONT is a story of love, loss, heroism, honor and ultimately, hope.

My Review:
Hannah did a marvelous job of taking something we hear about every day and giving us an inside glimpse of a family scarred by war.  This novel was an example of how war changes everyone, and leaves an impression on soldiers' souls for a lifetime.  Jolene is the heroine of our story, and even though she beat the odds of her youth, she now has a new battle to face.

Since Jolene was raised by two alcoholic parents, she adapted the attitude early on of brushing off the bad circumstances, smiling, and moving on.  She wouldn't allow herself to grovel in self-pity.  This attitude can be fine and dandy in most circumstances, but in others it may appear that you are not offering support to others in need.  This behavior is what pushed her husband Michael away as he deals with his grief alone and practically giving up on their marriage.

Things change quickly for the family when Jolene is deployed to Iraq as a helicopter pilot.  As she prepares for war she tries to assure her girls that she will be fine and won't even see the front lines of battle.  But she is scared and doesn't know what to expect over there.  Her heart and mind are in more turmoil as she realizes her marriage is over as her unit deploys.

I think Hannah did a great job of letting us know what the war is like.  One thing I guess I didn't realize before reading this novel is that unlike previous wars, everywhere is the front line. There isn't a safe haven to retreat to and soldiers must always be on their guard.  We all hear how bad things are on the news, but sometimes the gravity of the situation is not realized.  That's how it was for me until I read this book.

While Jolene is gone, Michael steps up to the plate and finally becomes the father he should have been years ago.  He changes in her absence, and also comes to accept Jolene for the woman she is, the woman he fell in love with.  Upon her return, they are both wounded souls and now must fight for the person they fell in love with, although they have both changed and will never be the people they once were.

This was a very good book, and I think my only complaint is the overall sadness of the story.  I understand it is not a joyful theme by any means, but I was spotted crying several times while reading this one.  With themes of family, love, loss, war, and perseverance, I think many of you would enjoy this book.  The gals in my book club loved this book and it made for a great discussion.  I don't hesitate in recommending this novel for personal reading or as a book club selection.

Disclosure:  This book was provided to my book club from the publisher in agreement that we would read it as a group and provide honest feedback.

From what I understand, most of Hannah's books have a sad undertone like that. I still want to read this book!

I love KristinH but haven't read this one yet. I had just read a war book and wasn't up for another. She has a great way of kicking in the emotional.

Her new one comes out in April I believe.

Great review, especially on the frontline for war, thanks.

Not a fan of war books. I can read 'em if I know nothing about them upfront but if I know they are about war, I run the other way. Just not a topic of interest to me.

I read this book last month and was engrossed in it. I adore Hannah's writing style and although this was sad, it told a story that was important and the character development was strong. I have been on a blogging break and haven't written a review but hope to soon. My favorite book so far by Hannah is The Winter Garden. I just read Firefly Lane which is also good.

I won this book a few weeks ago, and it will be my first Hannah read. From your reactions, I expect that I will be very caught up in the story, and that I will love it. Fantastic review, Amy. This is a book I need to read as soon as it arrives!

This is Kristin Hannah at her most superb - I can't imagine what you went through as you researched this, Kristin, but I am oh so glad you did. Thank you for your service and helping us understand!