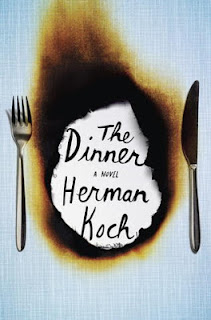 
Here is a summary of the book from the AudioGO website:


It's a summer's evening in Amsterdam, and two couples meet at a fashionable restaurant for dinner. Between mouthfuls of food and over the polite scrapings of cutlery, the conversation remains a gentle hum of polite discourse--the banality of work, the triviality of the holidays. But behind the empty words, terrible things need to be said, and with every forced smile and every new course, the knives are being sharpened. Each couple has a fifteen-year-old son. The two boys are united by their accountability for a single horrific act; an act that has triggered a police investigation and shattered the comfortable, insulated worlds of their families. As the dinner reaches its culinary climax, the conversation finally touches on their children. As civility and friendship disintegrate, each couple shows just how far they are prepared to go to protect those they love. Tautly written, incredibly gripping, and told by an unforgettable narrator, The Dinner promises to be the topic of countless dinner party debates. Skewering everything from parenting values to pretentious menus to political convictions, this novel reveals the dark side of genteel society and asks what each of us would do in the face of unimaginable tragedy.

My Review:
This is my first experience with Herman Koch's work, and I can tell you it won't be my last.  Koch made me stop and think about the simple act of going out to dinner with your family.  To think when you are sitting in a restaurant with maybe 30 tables filled with guests, how many of those tables have serious discussions where life changing decisions are being made right there?  Although we are given a front row seat as events unfold for two couples dining together, the story is being told from the perspective of one diner.

Two couples meet at the high-end restaurant where the meal is served in several courses.  Paul and Serge are brothers and they both have their wives with them.  They both have teenage sons and it is revealed after the first couple of courses that their boys have gotten themselves into some pretty serious trouble.  They planned to discuss the problem at hand so they can plan their next step, hopefully not destroying their young sons' lives.

I loved how events unfolded through each course of their meal together.  Secrets are revealed and Paul comes to his own conclusions as old memories come to light.  Assumptions are made about other dinner guests surprising Paul when he learns the truth later.  But I enjoyed how over the course of this dinner, Paul went through his memory bank bringing to light all activities that could have led them to this moment, right now.

I thoroughly enjoyed this audiobook that was narrated so well by Clive Mantle.  Mantle did a great job of bringing Paul's character to life for me and sharing his story.  This novel came down to a story of human instinct for me.  Just how far would one go to protect the one's he love?  With themes of family and secrets this was a beautifully written novel and I think many of you would enjoy it as much as I did.  I don't hesitate in recommending this book for either personal leisure or as a book club discussion.

Disclosure:  This book was provided to me by the publisher through the Audio Jukebox program in exchange for an honest review.
Posted by Jo-Jo at 7:30 AM

I am so behind on my reading but I do have this one in my pile. So glad you liked it. It sounded like something I'd like so I snatched it up.

I think you will enjoy this one Ti!

I read this book and enjoyed it too.

I keep reading good things about this. I just went out to dinner tonight and now I'm wondering what everyone else was talking about.

I've had this on my list for a while. After reading your review, I'm thinking about listening to the audiobook instead of reading it! Glad you liked it!