Blog Tour and Review: The Queen's Vow by C.W. Gortner 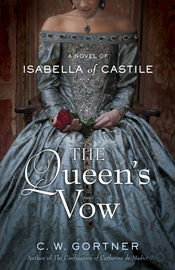 Here is a summary of the novel from the author's website:


Young Isabella is barely a teenager when she is thrust into danger. Suspected of treason and held captive, she treads a perilous path, until, at age seventeen, she finds herself heiress of Castile, the largest kingdom in Spain. Plunged into a deadly conflict to secure her crown, she is determined to wed the one man whom she has vowed to love yet is forbidden to her—Fernando, prince of Aragón.


As together they unite their two realms under "one crown, one country, one faith," Isabella and Fernando face an impoverished Spain beset by enemies. With the future of her throne at stake, Isabella resists the zealous demands of the inquisitor, Torquemada, even as she is seduced by the dreams of an enigmatic navigator named Columbus. But when a violent, treacherous battle against an ancient adversary erupts, it will test Isabella’s resolve, her courage, and her tenacious belief in her destiny . . . .


From the glorious palaces of Segovia to the battlefields of Granada and intrigue-laden gardens of Seville, The Queen’s Vow sweeps us into the tumultuous forging of a nation and the complex, fascinating heart of the woman who overcame all odds to become Isabella of Castile.

My Review:
Another hit by Mr. Gortner as he captures the heart and soul of Queen Isabella.  After reading this novel I couldn't help but ask myself why I don't read more historical fiction.  Gortner does a wonderful job of depicting not only the time period, but bringing to life the character of young Isabella.

After the death of her father, Isabella is whisked away from Castile at a very young age for her safety.  She grows up without the privileges that come with royalty as she doesn't own beautiful gowns or even attend court on a regular basis.  When the country is struggling from poverty, her stomach also aches from hunger.

Isabella lives a normal childhood away from the politics and treason of court, until one day her presence is requested at Castile.  She has no idea why her half-brother, the king, would want to see her, but his request cannot be denied.  This first trip to the court opens a new world to Isabella, not only for her destiny of eventually becoming the queen, but also sparking feelings within her heart that are new to her.

It is quite a journey to the crown for Isabella as she fights for what is best for the people of Castile.  It is hard to imagine the stress that these women of power and influence must endure, but Gortner does a great job of giving a glimpse of the trials that Isabella went through.  We not only see her fight for her crown, but we also see the struggles within her own marriage created by politics.

I think you can tell that I enjoyed this novel of historical fiction.  With themes of honor, destiny, treason, and royalty, I think many of you would enjoy this one also.  Whether you are reading this book for personal leisure or as a book club discussion I don't think you will be disappointed.  I don't hesitate in recommending this novel.

A lot of my friends would probably love this as well.

Thank you for this lovely review! I'm honored to be here as part of my tour and hope your readers enjoy THE QUEEN'S VOW.

I really enjoyed this one as well. Great review! I haven't read many historical fiction reads lately, I really should check some out soon.

I adored this book. I really love all of his books..he does such a wonderful job humanizing some controversial royals.