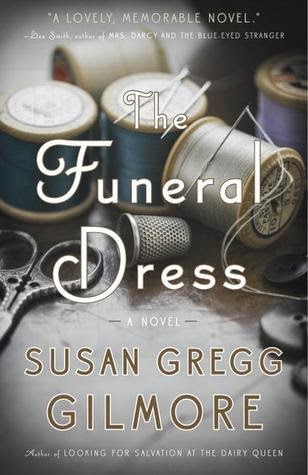 Emmalee Bullard and her new baby are on their own. Or so she thinks, until Leona Lane, the older seamstress who sat by her side at the local shirt factory where both women worked as collar makers, insists Emmalee come and live with her.  Just as Emmalee prepares to escape her hardscrabble life in Red Chert holler, Leona dies tragically.  Grief-stricken, Emmalee decides she’ll make Leona’s burying dress, but there are plenty of people who don't think the unmarried Emmalee should design a dress for a Christian woman - or care for a child on her own. But with every stitch, Emmalee struggles to do what is right for her daughter and to honor Leona the best way she can, finding unlikely support among an indomitable group of seamstresses and the town’s funeral director. In a moving tale exploring Southern spirit and camaraderie among working women, a young mother will compel a town to become a community.

My Review:
This was a lovely story that is told between two women and also two different time periods.  It starts out in 1970s Tennessee while also giving glimpses of 1950s Tennessee.  Although the story is mostly about young Emmalee we also get to know what made Leona the woman she was.

Emmalee didn't have much of a life living in Red Chert with her father who spent most of his days in a drunken state.  Her life was cast in a new direction when she took a job at the Tennewa Shirt Factory.  Most of the women worked there for years, but they took Emmalee under their wings, teaching her the ropes and becoming one of them.  She needed to earn money to support her new baby because her father certainly wasn't any help in that department.  She didn't expect to develop such close friendships with her co-workers, but working side-by-side next to Leona created a relationship similar to a mother and daughter.

Leona has lived a hard life up on Old Lick mountain and has had more than her share of heartache.  She and her husband, Curtis, live in a small trailer on the mountain, nothing fancy but they get by fine with their love of the Lord and each other.  They don't have much, but never having children of their own they decide to take Emmalee and her new baby into their home.  They know Emmalee doesn't receive any form of support at home and they have enough love to help both of them get a start in life.

A turn of event puts a crimp in the plans to move Emmalee into Leona's home, setting Emmalee on a new path of self-discovery.  Emmalee doesn't know much about mothering, but expects Leona to help her in this area.  I have to tell you that Emmalee is not a good mother throughout the book and that was quite disturbing for me.  I know she was young, but I do believe that some things just come natural for mothers.  But I also know that if there isn't anyone to offer assistance parents can make big mistakes.

Although I was often frustrated with Emmalee, I also couldn't help wanting her to come out on top.   I enjoyed reading this story and couldn't help but read certain parts over again that made me smile.  With themes of motherhood, friendship, and losses, I'm sure many of you will enjoy this book as much as I did.  I don't hesitate in recommending this novel for personal leisure or as a book club discussion.


Disclosure:  This book was provided to me by the publisher in exchange for an honest review.
Posted by Jo-Jo at 7:30 AM

I've seen this one around and skipped over it because of the time period (not a fan) but many have said pretty good things about it.