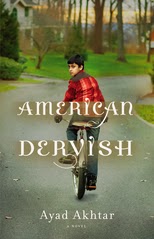 Hayat Shah is a young American in love for the first time. His normal life of school, baseball, and video games had previously been distinguished only by his Pakistani heritage and by the frequent chill between his parents, who fight over things he is too young to understand. Then Mina arrives, and everything changes.

Mina is Hayat's mother's oldest friend from Pakistan. She is independent, beautiful and intelligent, and arrives on the Shah's doorstep when her disastrous marriage in Pakistan disintegrates. Even Hayat's skeptical father can't deny the liveliness and happiness that accompanies Mina into their home. Her deep spirituality brings the family's Muslim faith to life in a way that resonates with Hayat as nothing has before. Studying the Quran by Mina's side and basking in the glow of her attention, he feels an entirely new purpose mingled with a growing infatuation for his teacher.

When Mina meets and begins dating a man, Hayat is confused by his feelings of betrayal. His growing passions, both spiritual and romantic, force him to question all that he has come to believe is true. Just as Mina finds happiness, Hayat is compelled to act -- with devastating consequences for all those he loves most.

American Dervish is a brilliantly written, nuanced, and emotionally forceful look inside the interplay of religion and modern life. Ayad Akhtar was raised in the Midwest himself, and through Hayat Shah he shows readers vividly the powerful forces at work on young men and women growing up Muslim in America. This is an intimate, personal first novel that will stay with readers long after they turn the last page.

My Review:
As a Christian I wasn't sure how I would appreciate a novel that goes into the life of a Muslim family.  I do appreciate the story that Akhtar shared with us, giving us honest glimpses of how people are treated both within their religion and those on the outside.  The story is about young Hyat, who has grown up with privileges in the United States, that his family still in Pakistan with never experience.

Although Hyat is growing up in a Muslim home, his parents are not devout Muslims.  They do not attend the mosque meetings regularly or even pray daily.  When Hyat's mother's best friend comes from Pakistan to live with them, she is the one to reveal the Muslim religion to him.  She gives Hyat his own Quran and starts to give him personal lessons to help him comprehend it's meaning.

Hyat puts his Muslim religion before all else as he prays daily and starts the process of memorizing and studying his Quran.  After certain events take place with non-Muslims, Hyat's father becomes more distanced from the Muslim faith.  In a moment of frustration and anger his father even goes so far as to prohibit Hyat from reading the Quran ever again.  But Hyat has the will-power to conduct his studies privately.

As the story unfolds, Hyat learns that his Muslim faith is not what he expected.  He doesn't understand how people that are unforgiving and selfish seem to be the same ones that are highly favored by their God.  Mina tells him to find the answers within himself, while the elders set him on a different journey.

I thoroughly enjoyed this book giving me a glimpse into a culture as it attempts to cross with an American way of life.  Akhtar did a great job narrating this novel, breathing life into Hyat's character, celebrating his happiness and grieving over his frustrations.  With themes of family, faith, and truths, you may enjoy this book as much as I did.  I highly recommend this novel for either personal leisure or as a book club discussion.

Disclosure:  This audiobook is from my personal library and I listened to it for my own entertainment.

I think I have this on a shelf somewhere. Your review makes me want to find it and get it read.