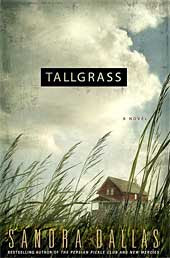 The following is a summary of Tallgrass by Sandra Dallas from her website:

During World War II, a family finds life turned upside-down when the government opens a Japanese internment camp in their small Colorado town. After a young girl is murdered, all eyes turn to the newcomers. Rennie has just turned thirteen, and until this time, life has been predictable and fair. But the winds of change are coming and with them, a shift in her perspective and a discovery of secrets that can destroy even the most sacred things. Part thriller, part historical novel, Tallgrass is a riveting exploration of the darkest—and best—parts of the human heart.

I must admit that this book delves into a part of America's past that I really was not very knowledgeable about. Although this novel didn't really describe the Japanese internment camp itself, Dallas did a wonderful job of showing how this small Colorado community changed after the camp was opened.

There are several strong themes included in this novel, such as the strong bonds of family, friendships among women, and fears created by circumstances. The book starts out in a small Colorado town, not long after the bombing of Pearl Harbor. A Japanese internment camp was built close to this small community, which puts all of the residents in a new state of fear. There were a few of these camps built throughout the Western United States and the purpose of these camps was to incarcerate all individuals that would have been considered Japanese ethnicity that resided on the West Coast.

Residents became scared of the situation that was being forced upon them. They were sending their local boys off to war in the Pacific to fight against the Japanese, yet the government was putting Japanese people in their back yards. Local residents didn't care if these Japanese people were actually American citizens that were just as upset because they were being stripped of their rights. I found it ironic that many of these boys were forced to stay at the internment camp, but if they were to join the Army they were free to go and fight for the USA.

Rennie Stroud was a young teenage girl that lived on a neighboring farm to the Tallgrass internment camp. Her parents tried to provide a solid and morally sound family life for their children. Rennie's father is not shy in voicing his disappointment in his neighbors when they claim their distrust of the new Japanese residents. He shares his frustrations with his family and friends as he indicates that these American citizens have been stripped of their rights. Rennie becomes even more confused as she sees the confinement of these people in her town, but when she makes a trip to Denver with her mother, there are Japanese people walking free.

To complicate matters further, a young girl is murdered not long after the Tallgrass camp was built. With all of the fear in the community it isn't a surprise that the residents claim that it was one of the Japanese occupants that committed the murder. I enjoy how Dallas kept this part of the story a mystery until the end of the novel.

The Stroud family stood their ground when it came to how they felt about their new neighbors. Mr. Stroud was harrassed for hiring some of the Tallgrass inhabitants to help with the beet harvest. By hiring these boys they really got a chance to know them on a personal level and actually considered them as part of the family.

Women pulling together during difficult times was a very important part of this novel. The Jolly Stitchers was the name of the sewing group that Rennie's mother belonged to and they would show up at the doorstep at the drop of a hat. Here are a couple of excerpts that I enjoyed:

When the Jolly Stitchers found out Mom was ailing, they brought their casseroles and cakes, their cabbage rolls and carrot puddings. Mom drew strength from the women, even those she didn't like so much, because their calling on her showed they cared. I learned a great deal about women during that time, about how in tough times, they pulled together, looked out for one another. They brought their first daffodils to Mom and sewed on their quilt squares while they gossiped and assured her she'd be all right. pg. 134-135

I was learning that when women liked each other the way Mom and Cousin Hazel did, they formed a bond that was different from what either one had with her husband. It didn't mean Mom was disloyal to Dad for being that tight with women. That closeness was in addition to what she had with Dad. pg. 161

Although this was a good story that gave a lot of historical information about a peice of America's dark history, I don't think that Dallas' writing did much for me. I did enjoy learning about Executive Order 9066, that Dallas included in its entirety at the end of the book. If you are interested in learning more about it you can read the Executive Order here. My book club meets tonight to discuss this so I can't wait to see what their thoughts will be.

That was a great review. I recently read Hotel on the Corner of Bitter and Sweet about the internment camps and I also learned alot about that time in our nation's history. Thanks for your review.

Sorry this one fell short of it's potential.

Great review Jo-Jo. Sorry it fell short for you but it does sound good. I think I'll add it to my tbr list. I do really like the cover too.

Good review ... told me a lot and also was very honest. I always appreciate that in a review! thanks.

Excellent review. The book sounds interesting, will have to look into it. Congrats on finished your very first challenge and thank you for joining in.

I thought I would let you know that overall the rest of the ladies in my group enjoyed this book more than I did.

I read this last year for an online bookclub and enjoyed it. I know very little about the internment camps and similar situations that happened during the wars. This was a book I wouldn't normally chose myself but I'm glad I read it. I also read The Guernsey Literary and Potato Peel Pie Society the same month and I'm working on Hotel at the Corner of Bitter and Sweet. So much history knowledge is making my head hurt! :)

I'm listening to the audio version right now and enjoying it a lot.

This sounds like an interesting book. Sorry you were disappointed. Thanks for the honest review. We posted about your review here on War Through the Generations.