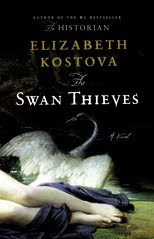 Here is a summary of The Swan Thieves from the Hachette website:

Psychiatrist Andrew Marlow, devoted to his profession and the painting hobby he loves, has a solitary but ordered life. When renowned painter Robert Oliver attacks a canvas in the National Gallery of Art and becomes his patient, Marlow finds that order destroyed. Desperate to understand the secret that torments the genius, he embarks on a journey that leads him into the lives of the women closest to Oliver and a tragedy at the heart of French Impressionism.

Kostova's masterful new novel travels from American cities to the coast of Normandy, from the late 19th century to the late 20th, from young love to last love. THE SWAN THIEVES is a story of obsession, history's losses, and the power of art to preserve human hope.

My Review:
This was quite the audiobook that had various narrators including Anne Heche, Treat Williams, and many more.   I admit that I do not have a big appreciation of art but was intrigued by this story because of the historical elements.  This book actually shares several tragic love stories with us, one from the past, a couple from the current day, and the most mysterious is the love that connects these two time periods.  Various chapters are narrated by different characters giving you a glimpse into each of the different lives and feelings.  I think that this method worked very well for this book and having different speakers narrating especially helped me follow the story easily.

Robert Oliver is thrust into Dr. Andrew Marlow's life when he is admitted into the mental health facility after attacking a painting in an art gallery.  Marlow cannot understand how such a gifted artist could attack someone elses artwork.  Since Robert will not speak with Marlow about the incident he decides to go on a quest to find out all that he can about the famous artist.  Not only is he introduced to the women that have loved Robert Oliver, but Dr. Marlow also is reminded of his own love of art that has been pushed to the back burner because of his career.

First Dr. Marlow is introduced to Oliver's wife Kate, who is also the mother of their two children.  Kate proceeds to tell Marlow the entire story of their lives together, from when she first laid eyes on Robert until she could not put up with him any longer.  As Robert barely holds on to teaching jobs at colleges, Kate holds the family together in her own way that becomes both physically and mentally draining.  When she realizes that his devotion lies elsewhere besides his family she decides to throw in the towel and send Robert on his way.  So as Robert leaves the arms of his devoted wife he finds himself in the embrace of one of his students from years ago.

There were many questions as to the woman that Robert was having an affair with, but once Dr. Marlow realizes that she does exist he finds her in an attempt to gain more knowledge about his patient.  Mary had also fallen in love with Robert, but like his wife, finds that she just cannot seem to keep his affections for long.  I found it very interesting how Marlow finds himself smitten with the women in Robert's life.  Both of these women helped him discover a more emotional side to himself.

I did enjoy how the mystery of Robert's incident unfolds, by hearing the story from different characters throughout the novel.  I find it interesting how this was a quest to uncover what exactly happened to the artist, but we never heard about the events from his personal perspective.  This was my main problem with the book as I feel it would have wrapped up much better by even having the final chapter narrated by Robert.  I don't always like neat and tidy endings, but I think because this was such a long book it would have helped my appreciation of the story.  If you enjoy books that have themes of art history and unattainable love this book may be for you.

Disclosure:  This audiobook is from my personal collection and I read it for my own enjoyment.

You can check out more great book reviews at Cym Lowell's Book Review Party Wednesday!
Posted by Jo-Jo at 8:41 AM

Very nice review, Jo-Jo. I really must do the audio book thing more often as I am a knitter and it's really the best way to do my two most favourite things!!

I have seen this book and was curious about it. Thanks for your input!

Nice review, Jo-Jo! I am not a fan of audio books, but perhaps this would be worth reading.....

I read a print version of the book and really enjoyed it. Sorry you didn't like it as much

Lisa: The audiobooks would go perfectly with knitting. I need to remember to pull out my knitting and crocheting when we are watching movies!

Julie: I probably wouldn't listen to audiobooks if I weren't in my car for about half an hour a day.

Kathy: I really liked the writing but the end just didn't sit right with me for some reason. The ladies in my book club would be shocked because they think I love everything I read.

I loved this story but I couldn't stand listening to the audio. I tried but had to switch to the book. Sorry it wasn't a better experience for you but thanks for reviewing it.

My partner and I love art so I may have a look at this book.

Serena and Rob: I think that having an appreciation for art will would really enhance this story.

Sandra: I actually enjoyed the audioversion and I think the writing was wonderful. Somehow the ending just threw things off for me.

Great review! I have this one on my wishlist already!