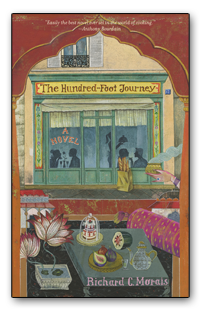 Here is a summary of The Hundred-Foot Journey from Richard Morais' website:

A middle-aged chef, Hassan Haji, recounts his life’s journey, from his family’s modest restaurant in Mumbai to his elegant restaurant in Paris where he has conquered the insular world of French haute cuisine. A tragedy at home in Mumbai pushes Hassan’s boisterous family into a picaresque journey across Europe, where they ultimately settle opposite a famous chef, Madam Mallory, in the remote French village of Lumière. After a series of hilarious cultural mishaps, the grand French chef discovers, much to her horror, that the young boy cooking in the cheap Indian restaurant across the way is a chef with natural talents far superior to her own. A culinary war ensues, full of plot twists, pitting Hassan’s Mumbai-toughened father against the imperious Madam Mallory, a battle royale that finally reveals to young Hassan his true destiny in life.

Full of eccentric characters, vivid settings, and delicious meals, Hassan’s charming tale lays bare the inner workings of the elite world of French haute cuisine. In the process, however, Hassan also discovers a truism that bedevils any man who has gone out into the world to make his mark: the true costs of rising to the top are only revealed later in life.

My Review:
This was such a fun story that brought you to many destinations including, India, London, and Paris.  We followed the life of a young Indian man named Hassan and watched him develop as a chef from cooking spicy indian food to authentic french cuisine.

I was captivated by the journey that young Hassan had to take in order to find his true calling in life.  Even as a young boy living not far from the slums in India, he found himself drawn to the markets where he could sample the various foods that were available.  When Hassan's mother is tragically killed he finds himself travelling with his family in search of a place that they could call home.

First they settle in London to stay with Hassan's mother's family.  This seemed the most confusing time for Hassan and the only thing that he seemed to be sure of was the food that he loved.  He lived a carefree and wreckless life in London, which eventually spurred their sudden departure and set them looking for a home once again.

After travelling for what seems like an eternity without a specific destination in sight, the stumble upon a french village called Lumiere that appears to have good possibilities for their homestead.  Before you know it they have purchased a huge home and start operating an Indian restauraunt on the main floor.  Many of the village citizens welcome the new family and restaurant into their community, except for Madame Mallory, who runs a famous french restaurant right across the street.  She becomes furious as she sees her regular patrons dining across the street to try something different.

Although Hassan is just a young man, his father decides to teach him what is needed for him to become the head chef in their indian restaurant.  He catches on quite quickly and enjoys cooking the meals from his home country, but for some reason he finds himself drawn to the cooking that is taking place across the street.  When Madame Mallory realizes that Hassan has a natural talent in the kitchen she takes it upon herself to teach him everything that she knows about french cooking.  After years of learning and cooking under the world famous Mallory, and some other help from her along the way, Hassan develops into a notable french chef himself.

I enjoyed this story with the descriptions of the various foods, the different countries and cultures.  With themes of food, loss, anger, forgiveness, fulfilling one's destiny, starting over and moving on, this book really had a lot to offer.  I love cultural fiction and this one did not let me down!

If you are interested in reading more reviews of this book or even trying to win a copy for yourself, here is the complete list of tour stops:
7/5 & 7/6: http://www.devourerofbooks.com/
Review, guest post, and giveaway

Disclosure:  This book was provided to me by InkWell Management in exchange for an honest review.
Posted by Jo-Jo at 7:18 AM

I love food-related novels, and that cover is gorgeous.

This sounds like a very entertaining book that I would certainly enjoy, especially considering how much Iove to cook! I'm glad you enjoyed it.

This sounds great - a journey, great cities and food!

I enjoyed this story as well. I would have liked a bit more about the personal side of Hassan's life but still I enjoyed the vivid language of the book.