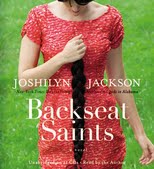 Here is a summary of Backseat Saints from the Hachette website:

Rose Mae Lolley is a fierce and dirty girl, long-suppressed under flowery skirts and bow-trimmed ballet flats. As "Mrs. Ro Grandee" she's trapped in a marriage that's thick with love and sick with abuse. Her true self has been bound in the chains of marital bliss in rural Texas, letting "Ro" make eggs, iron shirts, and take her punches. She seems doomed to spend the rest of her life battered outside by her husband and inside by her former self, until fate throws her in the path of an airport gypsy---one who shares her past and knows her future. The tarot cards foretell that Rose's beautiful, abusive husband is going to kill her. Unless she kills him first.

Hot-blooded Rose Mae escapes from under Ro's perky compliance and emerges with a gun and a plan to beat the hand she's been dealt. Following messages that her long-missing mother has left hidden for her in graffiti and behind paintings, Rose and her dog Gretel set out from Amarillo, TX back to her hometown of Fruiton, AL, and then on to California, unearthing a host of family secrets as she goes. Running for her life, she realizes that she must face her past in order to overcome her fate---death by marriage---and become a girl who is strong enough to save herself from the one who loves her best.

BACKSEAT SAINTS will dazzle listeners with a fresh and heartwrenching portrayal of the lengths a mother will go to right the wrongs she's created, and how far a daughter will go to escape the demands of forgiveness. With the seed of a minor character from her popular best-seller, GODS IN ALABAMA, Jackson has built a whole new story full of her trademark sly wit, endearingly off-kilter characters, and utterly riveting plot twists.

My Review:
I loved listening to this story that was read by the author, Joshilyn Jackson, herself!  I think I could have listened to her voice all day and found when I popped the first disc in I was so engrossed in her voice that I found myself driving only 45 mph on the way home one evening.  Jackson did a great job of delivering such a serious storyline by managing to insert both humor and jaw-dropping fear within the same book.

We are introduced to Ro Grandee as an abused housewife whose life takes a drastic change after consulting with a gypsy in an airport one afternoon.  Ro realizes that she must kill her husband before he kills her.  When all goes wrong with the assassination attempt life at home changes as her husband seems to magically turn into the man that she fell in love with.  After being abused for so long, how long can this change of attitude last?

Ro finds herself on the road, first to flee from her abusive husband, then to find her mother that abandoned her years ago, but in the end it turns out to be a search for her true self.  As she battles demons from her past she learns a lot about herself and can finally reconcile with the cards that have been dealt to her in the game of life.

Disclosure:  This book was provided to me by Hachette in exchange for an honest review.

I have a hardcover version of this book to read but your review has me tempted to get the audibook version and listen to this story! I love the idea that Jackson is able to infuse te intense story with some humor and lightness. I think books that deal with serious, disturbing themes, do best when there is a break from the tension at times.

I'm glad you enjoyed this audibook so much. However I decide to experience "Backseat Saints", I'm looking forward to it after your review!

I think the title is wonderful! It makes me wonder how the theme crops up in the story.

I'm a huge fan of Jackson's work. I got to meet her a few months ago and found out that she has a background in theater. I really want to listen to one of her books now.

Amy: I think this book would be a good one to enjoy by reading and listening to it. My friend is listening to it now and we are both thinking that it would be nice to see some of this story in print.

Enbrethiliel: I also love the cover...I admit that I have been known to read a book because of it's cover!

Kathy: I just loved listening to her voice! I certainly does not surprise me that she has a theater background.

Leslie (Under My Apple Tree) said...

This is a new author for me ... I'm putting this title on my list. And I too will read a book if I like the cover.

An awesome review! I wish I could get the audio version as well, it would definitely be nice to hear the author tell her tale.