Review: How to be an American Housewife by Margaret Dilloway 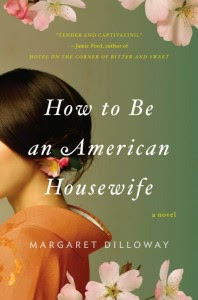 Here is a summary of How to be an American Housewife from the Penguin website:

A lively and surprising novel about a Japanese woman with a closely guarded secret, the American daughter who strives to live up to her mother's standards, and the rejuvenating power of forgiveness.

How to Be an American Housewife is a novel about mothers and daughters, and the pull of tradition. It tells the story of Shoko, a Japanese woman who married an American GI, and her grown daughter, Sue, a divorced mother whose life as an American housewife hasn't been what she'd expected. When illness prevents Shoko from traveling to Japan, she asks Sue to go in her place. The trip reveals family secrets that change their lives in dramatic and unforeseen ways. Offering an entertaining glimpse into American and Japanese family lives and their potent aspirations, this is a warm and engaging novel full of unexpected insight.

My Review:
Well it isn't a secret that I love books that give a glimpse into another culture and since this book had a way of blending the Japanese and American culture together, I think I loved it that much more.  We are introduced to Shoko in the beginning of the book, who is a Japanese woman that lived her adult life in the United States.  Now Shoko is elderly and has a bad heart but we learn about her life journey from Japan to America through her memories and her daughter Sue's adventure.

One of Shoko's first childhood memories that she recalls is being shot at by an American fighter plane while walking home from school with her brother and sister.  I can't imagine what it would have been like to run for the woods for protection from the fighter planes.  As Shoko grows up and finishes high school, the war comes to an end but there are Americans everywhere because of the military bases that are spread all over Japan.  Knowing that Japan would not offer much for Shoko as a woman, her father suggests that she becomes friendly with these American G.I.'s so she can marry one and head over to the United States for a life full of abundance and happiness.  How was Shoko to know that marrying a GI would cause a rift between her and her brother Taro for her entire adult life?

As an old woman, after Shoko realizes that her sister has just passed away she decides that it is time to confront her brother Taro by making ammends.  With her heart failing it is obvious she cannot make a trip to Japan to confront Taro, so she enlists her daughter Sue to take the journey for her.  When Sue travels to Japan and meets her Japanese family members for the first time, she finds herself revelling in everything about the country.  She not only finds a deeper appreciation for her heritage, but also for the life that her mother has led.  Although this trip was a favor for her mother to mend her family relationships, Sue stumbles upon a new path for her life.

I really enjoyed this novel as it plunged into the mother/daughter relationships that are not comprised of the average people.  It also contained historical elements that were new to me, such as the bombing of Nakasaki, which is one of the final acts of WWII in Japan.  With themes of ancestry, family bonds, love, and forgiveness this book would make a great book club selection and I am definitely planning on suggesting this one to the ladies in my group.

Disclosure:  This book was provided to me by LibraryThing in exchange for an honest review.
Posted by Jo-Jo at 7:48 AM

Nice review. Another book to add to my TBR list!

Great review, and this is sure a book that speaks out to me and begs me to read it

That sounds like my kind of story since I love books about other cultures too. Great review!

Thanks for the lovely review! If your book club decides to do it, I also do call ins or Skype.

I liked you review Jo Jo. I had this one home from the library last month, but it got returned unread sadly :(

I enjoyed this one too!

Great review. I love books from other cultures too. Will add it to my TBR.

The war story and the cultural differences definitely makes it different from the average mother-daughter story. It reminded me somewhat of The Joy Luck Club. I hope it's okay to link to your review on War Through the Generations.

Wonderful review -you really captured it!

I loved this book also for the same reasons. I love books about different cultures and mothers & daughters and that are well written novels. This would be a great book to discuss with a book club. Lovely review!