Audiobook Review: An Object of Beauty by Steve Martin 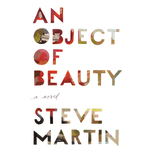 Here is a summary of An Object of Beauty from the Hachette website:

Lacey Yeager is young, captivating, and ambitious enough to take the NYC art world by storm. Groomed at Sotheby's and hungry to keep climbing the social and career ladders put before her, Lacey charms men and women, old and young, rich and even richer with her magnetic charisma and liveliness. Her ascension to the highest tiers of the city parallel the soaring heights--and, at times, the dark lows--of the art world and the country from the late 1990s through today.

My Review:
This is my first experience with Steve Martin's writing and I'm hoping it will not be my last.  This audiobook was narrated by Campbell Scott and he really seemed to capture the essence and the voice of Steve Martin for me.  Martin drops us right in the middle of the retail art world and brings to surface events that I wouldn't even have considered.

Daniel Franks realizes early on that he could never have a lasting and realistic relationship with Lacey Yeager.  When Lacey becomes a critical element to the Sotheby's Art Gallery she will basically do anything for anyone if the action will give her a step up the ladder in the art world.  Daniel is a nice young man who really is not looking for the additional stress in his life that this kind of person can bring.

As the story goes on, Lacey does become quite successful and actually does open her own gallery that flourishes with her touch.  It seems that Lacey may be about to lose everything from some illegal art dealings that have taken place in the past so now she must figure out what can be done so this does not happen.

This was a pretty good story but one part that did create a bit of confusion for me was the narration.  The book was supposedly narrated by Lacey's friend Daniel, but only a small portion of the book seemed to take on his voice.  Most of the novel seemed to be told in third person to me, which I really don't have a problem with, but it just didn't seem to flow well as it bounced between the voice of Daniel and the third person narration.

Besides my problem with the narration of the novel I did find some enjoyment of the story.  Although I didn't love the book, I did enjoy the story overall and would definitely suggest it to those that are interested in the art world.  I think I may have mentioned in the past that I am not a big 'lover of art', and that may have helped my appreciation of this book.

Disclosure:  This audiobook was provided to me from Anna at Hachette in exchange for an honest review.
Posted by Jo-Jo at 7:03 AM

I find his books to be entertaining, but never great. He's such a talented guy though (acting, writing, musician, etc.)

I've never read any of Steve Martin's books, but I've heard their pretty good. Not sure they're my cup of tea, but as Ti said, he's very talented.

I do love art, so I'm really looking forward to this book!

I love Steve Martin, but the one book I've read of his (Shopgirl) I was underwhelmed about. Seemd he should do his own narration, right?

I've read other reviews of this book - I think the written page experience seems to have been enjoyed more than the audio route? Sounds like a good way to pass the time with a little intrigue in the art world though.

I read this one but didn't really care for it. I imagine it would have been difficult to follow on audio.