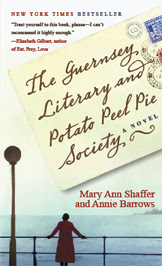 Here is a summary of the book from the Reading Group Guides website:

January 1946: London is emerging from the shadow of the Second World War, and writer Juliet Ashton is looking for her next book subject. Who could imagine that she would find it in a letter from a man she’s never met, a native of the island of Guernsey, who has come across her name written inside a book by Charles Lamb….

As Juliet and her new correspondent exchange letters, Juliet is drawn into the world of this man and his friends --- and what a wonderfully eccentric world it is. The Guernsey Literary and Potato Peel Pie Society --- born as a spur-of-the-moment alibi when its members were discovered breaking curfew by the Germans occupying their island --- boasts a charming, funny, deeply human cast of characters, from pig farmers to phrenologists, literature lovers all.

Juliet begins a remarkable correspondence with the society’s members, learning about their island, their taste in books, and the impact the recent German occupation has had on their lives. Captivated by their stories, she sets sail for Guernsey, and what she finds will change her forever.

Written with warmth and humor as a series of letters, this novel is a celebration of the written word in all its guises, and of finding connection in the most surprising ways.

My Review:
I loved this novel that is delivered to us in series of letters during the aftermath of WWII.  Most of the WWII books that I have read thus far have usually been pretty graphic as you are brought into the lives of Jewish families and concentration camps.  Please do not think that I am downplaying the importance of these books, as they are some of my very favorite books that I have ever read.  But The Guernsey Literary and Potato Peel Pie Society takes us into an area that is Occupied by Germany, so we get a glimpse of what life was like during the war for these citizens who are just victims of circumstance.

Juliet Ashton is an author whose life changes the day she receives a letter in the mail from Dawsey Adams who happens to live in Guernsey.  Dawsey felt compelled to write to Juliet when he found himself in possession of a Charles Lamb book that once belonged to her.  Juliet finds herself mesmerized by Dawsey's letter as he describes what life was like in Guernsey during the Occupation.  She can't help but ask Dawsey if he has any friends that would be interested in writing her also, in hopes that she may get an idea for a writing project.

Through the various letters that she receives from the Guernsey residents, she develops friendships before even meeting them.  She can't help but be drawn to visit Guernsey to meet all of these new friends in person.  Once she arrives on the island she finds a warm welcome that makes it seem like she is one of them and that she truly belongs there.  Who wouldn't fall in love with a town that accepts you in this way?

The one thing that she finds in common among her new group of friends is the deep love and respect they all have for a young lady named Elizabeth, who was taken away by the Germans during the Occupation.  They do not know what became of Elizabeth as they haven't heard from her since the end of the war, but she did leave her daughter Kit in her neighbors care.   Even though Juliet has never had the opportunity to meet Elizabeth, she grows to love her as much as everyone else just from helping to take care of her beautiful and strong-willed daughter Kit.

We get to love all of the residents of Guernsey just as much as Juliet had, as we learn how the war has left it's imprint on everyone's lives.  I must admit that I really did not understand or comprehend the extent of damage that Occupied areas endured during WWII before reading this novel.

Through all of the letters, the good and bad, secrets, and answers to questions are revealed.  We are also given the opportunity to see a romantic relationship bloom as it blossoms into a beautiful reality.  I can't help but highly recommend this novel for both personal fulfillment and as a book club selection.  I read this as a book club selection and it was loved by all in my group.

Disclosure:  This book was from my personal library and I read it for my own entertainment and as a book club selection.
Posted by Jo-Jo at 8:52 AM

It wasn't my kind of read but I did enjoy it and like knowing what others thought/think of it now.

I loved this book too! It made me want to visit Guernsey.

I loved this book :D It was just so perfect

I enjoyed this book also. I love stories that are based around letters.

I thought I was the last book blogger to read this book and now I really may be!

I loved this book, too. You must be looking forward to traveling back to Guernsey with The Soldier's Wife! I know I am. I will link to your review on War Through the Generations.

I so enjoyed this book. You will probably enjoy The Soldier's Wife as it is set in Guernsey. I have started reading it and quite like it.