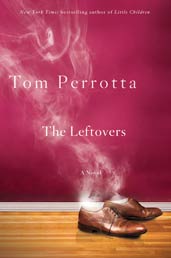 
Here is a summary from the Macmillan website:
What if—whoosh, right now, with no explanation—a number of us simply vanished?  Would some of us collapse? Would others of us go on, one foot in front of the other, as we did before the world turned upside down?

That’s what the bewildered citizens of Mapleton, who lost many of their neighbors, friends and lovers in the event known as the Sudden Departure, have to figure out. Because nothing has been the same since it happened—not marriages, not friendships, not even the relationships between parents and children.

Kevin Garvey, Mapleton’s new mayor, wants to speed up the healing process, to bring a sense of renewed hope and purpose to his traumatized community. Kevin’s own family has fallen apart in the wake of the disaster: his wife, Laurie, has left to join the Guilty Remnant, a homegrown cult whose members take a vow of silence; his son, Tom, is gone, too, dropping out of college to follow a sketchy prophet named Holy Wayne.  Only Kevin’s teenaged daughter, Jill, remains, and she’s definitely not the sweet “A” student she used to be.  Kevin wants to help her, but he’s distracted by his growing relationship with Nora Durst, a woman who lost her entire family on October 14th and is still reeling from the tragedy, even as she struggles to move beyond it and make a new start.

With heart, intelligence and a rare ability to illuminate the struggles inherent in ordinary lives, Tom Perrotta has written a startling, thought-provoking novel about love, connection and loss.

My Review:
What an interesting book this was that sets us in a town after a portion of it's citizens have disappeared.  The people that were left behind struggle with reasons as to why they weren't taken and where exactly the missing people went.  They were here one second and gone the next...but gone where?

Kevin is the mayor of Mapleton and although his family weathered the Sudden Departure, it definitely left them all broken in their own way. Kevin's wife Laurie does not think that the way they are living is benefiting society, so she joins a group that believes they are fulfilling a greater purpose.  His son Tom was in college when the Departure took place, so after losing half of his classmates to this event, he withdrew from school to follow an odd character who also thought had all the answers.  Kevin's high school daughter Jill still lives at home, along with her best friend that moved in, but high school has been elevated to a new level since the Departure.

We follow all of these characters lives throughout the novel, as we get a closer look at their hopes and fears.  They are all trying to move on with their lives, but find themselves stalled as there is so much uncertainty in the world where they live.  Half of the population is gone and who is to say that the rest of us won't be gone tomorrow?

There is so much to contemplate within this novel and I really feel that I shouldn't disclose any more about it that would ruin the story for you.  I love stories that make me stop and think, "How would I react in this situation?"  That is the type of book this is and the narrator did a great job of keeping the listener's attention.   With themes of end times, forgiveness, love and redemption, this book will give the reader or listener plenty to ponder long after you have turned the last page or listened to the last track.

Disclosure:  This book was provided to me through the Audiobook Jukebox reviewer program in exchange for an honest review.

This sounds thought provoking. I bet it would make a great book club pick!

I am excited to read this one. Hopefully I get it for Christmas!

I've read good things about this one and have it on my wish list.