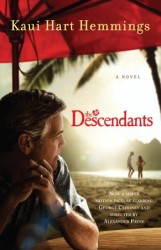 Here is a summary from the publisher's website:
Fortunes have changed for the King family, descendants of Hawaiian royalty and one of the state’s largest landowners. Matthew King’s daughters—Scottie, a feisty ten-year-old, and Alex, a seventeen-year-old recovering drug addict—are out of control, and their charismatic, thrill-seeking mother, Joanie, lies in a coma after a boat-racing accident. She will soon be taken off life support. As Matt gathers his wife’s friends and family to say their final goodbyes, a difficult situation is made worse by the sudden discovery that there’s one person who hasn’t been told: the man with whom Joanie had been having an affair. Forced to examine what they owe not only to the living but to the dead, Matt, Scottie, and Alex take to the road to find Joanie’s lover, on a memorable journey that leads to unforeseen humor, growth, and profound revelations.

My Review:
This was such a raw and emotional story that brings us along on the journey of Matt King as he prepares to say goodbye to his dying wife, Joanie.  During the process, as Matt searches the details of his life to uncover Joanie's secrets, he is drawn closer to his daughters, Alex and Scottie.

Joanie has lived a life of glamour and luxury.  Since she has been a model she easily attracts beautiful and wealthy people as friends.  When Joanie gets together with these friends they have a tendency to not think about consequences, but just do whatever they think will be fun at the time.  This does not always have a good outcome.

Alexis is the King's older daughter that was sent away to finish her high school education at a boarding school.  While still living at home Alexis developed a drug habit so after completing rehab her parents did not want to put her back into the society that contributed to her addiction.  Matt isn't sure how to deal with Alex when he goes to pick her up after Joanie's accident.

Scottie is the younger daughter, just on the cusp of becoming a teenager.  It is obvious she still wants to be a little girl, while wanting also to get the attention of young boys.  Matt can't help but wonder who will teach Scottie all the things girls need to know after Joanie dies.

As Matt is getting to know his daughters again, and prepare them all for the inevitable passing of Joanie, he discovers the unsavory details of her infidelity.  He is obviously angry and frustrated with this revelation, but somehow deals with those feelings and lets the love he had for Joanie provide the comfort his entire family needs.

I can tell you that I just loved this audiobook was wonderful and kept my attention throughout.  Davis did a great job of picking up on the emotions of our main character as he deals with this difficult situation.  With themes of family, love, and forgiveness I don't hesitate in recommending this book for either a book club selection or leisure reading.

Disclosure:  This audiobook was provided to me from the Audiobook Jukebox Reviewer Program in exchange for an honest review.

I had no idea this was a book. It sounds great.

I want to read the book after seeing the movie. My friend said the movie stayed pretty true to the book.

Oh...I have to check if the library has the audio. Heard the movie was depressing, and I think I may even have the ARC of this one. Great review JoJo.

Just saw the movie last night and I would love to read the book. I'll have to reserve it at the library.

I really want to check this one out. It sounds so good.

I actually JUst finished the audiobook and I thought it was great. Thanks so much for this review. For those of you who loved the book... ( and george clooney)..... A great radio show that discusses and reviews book is going over The Descendants. It's really a great treat every week and the host Elaine Charles is a delightful interviewer. Heres a link to the show and the Descendants review airs Feb 25th. http://bookreportradio.com/