Audiobook Review: More Than You Know by Penny Vincenzi 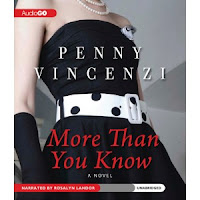 Title:  More Than You Know

Here is a summary of the novel from the AudioGO website:
It all comes down to love or money in a harrowing custody battle over a little girl, set against the glossy backdrop of the magazine and advertising worlds in 1960s London. A privileged girl from a privileged class, Eliza has a dazzling career in the magazine world of the 1960s. But when she falls deeply in love with Matt, an edgy working-class boy, she gives up her ritzy, fast-paced lifestyle to get married. By the end of the decade, however, their marriage has suffered a harrowing breakdown, culminating in divorce and a dramatic courtroom custody battle over their little girl. Also at risk is Eliza's gorgeous family home, a pawn in the game, which she can't bear to give up. True to form, Penny Vincenzi introduces a devious cast of characters seemingly plucked from the pages of sixties- and seventies-era magazines, as she deftly maneuvers between the glamorous, moneyed worlds of fashion and advertising, and a heart-wrenching custody battle going on in the courtroom where the social mores of the time are on full display.

My Review:
This was an interesting story to listen to as we follow the social circles of all the characters involved.  Not only do we get an up close look at Eliza's life, but we also get to see things from Matt's perspective as well.  Getting to know Matt and Eliza's siblings was like the icing on the cake.

After Eliza ends an engagement, she finds herself falling in love with Matt, a self-made entrepreneur.  A whirlwind romance results in a wedding between the two, leaving Eliza compromising the life she led up until now.  She has been very successful in the magazine industry, but Matt does not believe a wife should work outside the home.  She does hold onto her job for some time, but with the arrival of children Matt demands she stay home as his children will not be raised by nannies.

Besides the relationship issues between Matt and Eliza, we also follow Matt's sister Scarlet's love life.  I think the best way to describe Scarlet is to say she has been unlucky in love.  She has a tendency to choose and fall in love with married men.  Scarlet is such a sweet young lady and the reader can't help but desire that she finally finds a man that will give her the love she so richly deserves.

Circumstances eventually spin out of control within Eliza and Matt's marriage, leaving them both seeking a divorce.  Through their marriage, they opened themselves to each other's family members, making the separation that much more painful.  Things will never be the same between the two families.

Landor did a great job of narrating this novel.  I loved how she took on different personalities and voices for the characters.  Every now and then when a man was speaking, I thought there was a different narrator that was actually a man!  With themes of love, betrayal, fashion, and high society this novel was very enjoyable to listen to.  This book gets my recommendation as a great novel to pick up for personal leisure and listening pleasure.

Disclosure:  This audiobook was provided to me by the publisher through Audiobook Jukebox in exchange for an honest review.
Posted by Jo-Jo at 6:30 AM

It sounds like the narrator was the highlight of the book.

I love the cover!