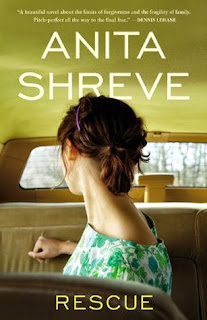 A rookie paramedic pulls a young woman alive from her totaled car, a first rescue that begins a lifelong tangle of love and wreckage. Sheila Arsenault is a gorgeous enigma--streetwise and tough-talking, with haunted eyes, fierce desires, and a never-look-back determination. Peter Webster, as straight an arrow as they come, falls for her instantly and entirely. Soon Sheila and Peter are embroiled in an intense love affair, married, and parents to a baby daughter. Like the crash that brought them together, it all happened so fast.

Can you ever really save another person? Eighteen years later, Sheila is long gone and Peter is raising their daughter, Rowan, alone. But Rowan is veering dangerously off track, and for the first time in their ordered existence together, Webster fears for her future. His work shows him daily every danger the world contains, how wrong everything can go in a second. All the love a father can give a daughter is suddenly not enough.

Sheila's sudden return may be a godsend--or it may be exactly the wrong moment for a lifetime of questions and anger and longing to surface anew. What tore a young family apart? Is there even worse damage ahead? The questions lifted up in Anita Shreve's utterly enthralling new novel are deep and lasting, and this is a novel that could only have been written by a master of the human heart.

My Review:
I think one of the reasons that I enjoy Shreve's writing so much, is she can take a situation that could happen to anyone, and delve into the hearts of all involved.  Her characters are real, and even when you don't like them, or some of the things they do, I believe events unfold in a way that they probably would in real life.

Webster is our main character in Rescue.  He is a young man with hopes and dreams ahead of him.  He fell in love with a piece of land not far from where he lives now, and he plans to build a home there, hopefully for the family he will have one day.  As an EMT worker he knows he will never be rich, but should be able to support a family somewhat comfortably.

Everything changes for Webster one day when he is called to the scene of a car accident.  When he rescues Sheila from the wreckage of her car, his life takes off in a new direction.  He finds himself drawn to Sheila, overlooking all the warning signs that come along with her lifestyle.  Before too long he finds himself with the family he dreamt of, but not yet being able to provide all the things he wanted.

When I think back to this novel, I fell that it truly went full circle.  As we follow Webster and Sheila's lives together and watch Webster's hopes and dreams fizzle and then evolve again.  Many parts of this story were not happy, but honestly, that is what happens when you try to take someone under your wing with demons that will not be contained.

I'm not going to give away any more of this novel but I can tell you I thoroughly enjoyed it.  With themes of love, anger, addictions, and forgiveness, this book would be great for a book club discussion or read for personal leisure.  I don't hesitate in recommending this novel.

Disclosure:  This book was provided to me by the publisher in exchange for an honest review.
Posted by Jo-Jo at 7:30 AM

I like Shreve's work too but haven't read this book yet. It sounds really good!