Audiobook Review: The Girl Who Played With Fire by Stieg Larsson 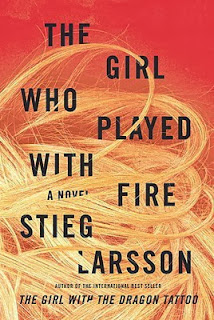 Title:  The Girl Who Played With Fire

Mikael Blomkvist, crusading journalist and publisher of the magazine Millennium, has decided to run a story that will expose an extensive sex trafficking operation between Eastern Europe and Sweden, implicating well-known and highly placed members of Swedish society, business, and government.

But he has no idea just how explosive the story will be until, on the eve of publication, the two investigating reporters are murdered. And even more shocking for Blomkvist: the fingerprints found on the murder weapon belong to Lisbeth Salander—the troubled, wise-beyond-her-years genius hacker who came to his aid in The Girl with the Dragon Tattoo, and who now becomes the focus and fierce heart of The Girl Who Played with Fire.

As Blomkvist, alone in his belief in Salander’s innocence, plunges into an investigation of the slayings, Salander herself is drawn into a murderous hunt in which she is the prey, and which compels her to revisit her dark past in an effort to settle with it once and for all.

My Review:
Since I listened to the first installment of this series, I figure there is no sense in not continuing, even though I was not impressed with the first one.   With Simon Vance narrating once again I figured I would at least get to listen to his voice for hours on end.

Many of the characters from the first novel are carried forward into the second installment.  We get a more personal glimpse into the life of Lisbeth, learning what made her into the cautious young woman she has become.  We learn about her family life as a young girl and watch events play out as she makes connections to her past.

Blomkvist finds himself in the middle of a heated sex trafficking investigation.  He hasn't had contact with Lisbeth for quite some time, so he is surprised as more information is discovered that somehow she is connected to the operation.  Knowing Lisbeth's standards and morals, Blomkvist realizes things are probably not as they appear.

Events unfold in this novel in a way that make you look forward to getting back to it just so you know what happens next.  That said, I do have to admit that I didn't love this one either.  One of my problems is that I think there were just too many characters for me to follow, and I had a hard time keeping them straight.  With themes of mystery, secrets, and suspense, you may enjoy this book more than I did.  I recommend this novel especially for those that thrive on thrillers, and also for book clubs that read this genre.

Disclosure:  I borrowed this audiobook from a friend to read for my personal entertainment.
Posted by Jo-Jo at 7:30 AM

I haven't even read The Girl with the Dragon Tattoo yet but I did see the movie. You've made me wonder if I want to read the books.