Review: The Promise of Stardust by Priscille Sibley 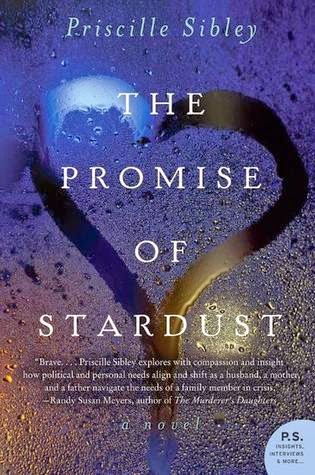 Matt Beaulieu was two years old the first time he held Elle McClure in his arms, seventeen when he first kissed her under a sky filled with shooting stars, and thirty-three when he convinced her to marry him. Now in their late 30s, the deeply devoted couple has everything-except the baby they've always wanted.

When an accident leaves Elle brain dead, Matt is devastated. Though he cannot bear the thought of life without her, he knows Elle was afraid of only one thing-a slow death. And so, Matt resolves to take her off life support.

But Matt changes his mind when they discover Elle's pregnant. While there are no certainties, the baby might survive if Elle remains on life support. Matt's mother, Linney, disagrees with his decision. She loves Elle, too, and insists that Elle would never want to be kept alive on machines. Linney is prepared to fight her son in court-armed with Elle's living will.

Divided by the love they share, Matt and Linney will be pitted against each other, fighting for what they believe is right, and what they think Elle would have wanted resulting in a controversial legal battle that will ultimately go beyond one family . . . and one single life.

My Review:
Let me tell you that this controversial novel made an excellent book club selection.  Most of the ladies in my book club are conservative so although we loved the story most of us found ourselves frustrated with the situation at hand.  Sibley did a wonderful job of creating a story that could easily be ripped from the headlines of today, making you wonder, "What is the right decision?"

Linney had an advanced directive in place indicating she never wanted to be kept on life support if there was no chance for recovery from an illness or accident.  She watched her mother die a slow and painful death and did not want to put herself or her loved ones through a similar experience.  How could she foresee that she could possibly be pregnant in this exact situation?  Would she change her mind about life support if it could save the life of the unborn child that she and Matt have tried so desperately to conceive?  These are the questions Matt struggles with as he fights for the life of his unborn child.

As Matt struggles to keep Linney alive long enough to bring their baby into this world, he must confront a new fight against several people who believe the physicians should follow her wishes.  This book tugged at the heartstrings page after page as we watch Matt struggle with his decisions.  He reads through her many journals that were started before they were even married, looking for clues to what she would actually want.

I don't want to give any more of this novel away as the intensity builds as new legal implications arise with the situation.  I did enjoy this novel and you may find it just as enjoyable with themes of love, promises, and a medical lawsuit.  I don't hesitate in recommending this novel for either personal leisure or as a book club selection.

Disclosure:  This book was from my personal library and I read it for my own entertainment and as a book club selection.
Posted by Jo-Jo at 7:30 AM

Oh, I can just imagine what a great selection this was for a book club!

Tough subject matter. During the emergency delivery of my son, my husband was asked who he wanted to save the most. Can you imagine? As if the doctors has already decided that they could not save both of us. He didn't share this info with me until my son was about two years old but what a decision to make.