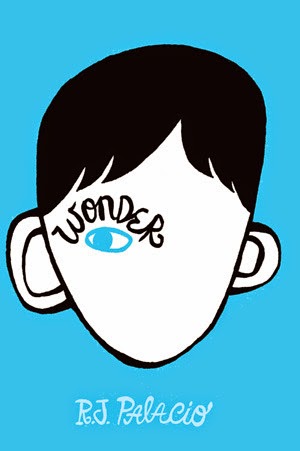 August (Auggie) Pullman was born with a facial deformity that prevented him from going to a mainstream school—until now. He's about to start 5th grade at Beecher Prep, and if you've ever been the new kid then you know how hard that can be. The thing is Auggie's just an ordinary kid, with an extraordinary face. But can he convince his new classmates that he's just like them, despite appearances?

R. J. Palacio has written a spare, warm, uplifting story that will have readers laughing one minute and wiping away tears the next. With wonderfully realistic family interactions (flawed, but loving), lively school scenes, and short chapters, Wonder is accessible to readers of all levels.

My Review:
I didn't know much about this book when my book club chose this one as a selection.  I knew that it was about a young boy that was being bullied, but I wasn't aware about his physical differences.  Kids can be mean to children who are just average, so imagine the things kids can think of when someone with so many differences, like Auggie, is cast into their school and lives.

Auggie knows he is different and he has come to accept that.  He has become accustomed to others being uncomfortable in his presence, and even the shock people experience when first encountering him.  Auggie is a normal boy underneath all his differences and although he is nervous about attending school for the first time he is excited about the possibilities.

This book is told from various perspectives of people who are a part of Auggie's life.  Some of the characters that we gain some insight from are his sister, and even some of the new kids he meets at school.  Of course I loved the chapters narrated by Auggie himself, but I also enjoyed the sections narrated by his sister.  Via is older than Auggie and things changed drastically for her after he was born.  As much as she loves her brother she also struggles to find her place in the world.  I loved watching her character grow in this book.

I don't want to give too much of this book away as it unravels perfectly while reading.  With themes of family, friendship, differences, and forgiveness, I hope you love this book as much as I did.  I highly recommend this book for all age groups, for either personal leisure or as a book club selection.

Disclosure:   I borrowed this book from the school library to read for my own entertainment and as a book club selection.
Posted by Jo-Jo at 7:30 AM

Oh, how I loved this book! I bet your book club found a lot to talk about.

Read this book aloud during a 10 hour long European road trip with the kids. The whole family took turns reading and hung on to every word. Teaches children to take quiet courage in the face of bullies and showing kindness under extreme peer pressure. Deep meaning of true beauty and true friendship is taught without preaching using kids terms and modern slang. Highly recommended for all ages. Thumbs up.