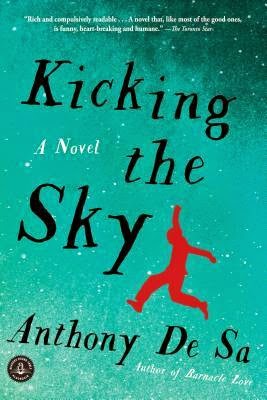 
Here is a summary of the book from the publisher's website:
In 1977 a shoeshine boy, Emanuel Jacques, is brutally raped and murdered in Toronto. In the aftermath of the crime, twelve-year-old Antonio Rebelo and his rapscallion friends explore their Portuguese neighborhood’s dark garages and labyrinthine back alleys. The boys develop a curious relationship with a charismatic, modern-day Fagin who is master over an amoral world of hustlers, thieves, and drug dealers.

As the media unravels the truth behind the shoeshine-boy murder, Antonio starts to see his family—and his neighborhood—as never before. He becomes aware of the dashed hopes of immigrants, of the influence of faith and the role of church, and of the frightening reality that no one is really taking care of him. So intent are his parents and his neighbors on keeping the old traditions alive that they act as if they still live in a small Portuguese village, not in a big city that puts their kids in the kind of danger they would not dare imagine.

Antonio learns about bravery and cowardice, life and death, and the heart’s capacity for both love and unrelenting hatred in this stunning coming-of-age novel set against the backdrop of a true crime that shook the city.

My Review:
Listening to this audiobook brought me back to a time when the world is just being revealed to this young person.  I was close to Antonio's age in 1977 and I can recall the feelings of protection from my parents, but yet wanting to venture on my own as new things are experienced.  Listening to this novel brought many memories back for me.

Antonio is our twelve-year-old main character who lives with his parents in a predominantly Portuguese neighborhood in Canada.  Life seems pretty normal for Antonio and his friends, but things take a drastic turn as events unfold throughout the novel.  Antonio certainly didn't expect to become a religious icon just from eating a meal at the dinner table.  This seemed to be more of a burden than a blessing to Antonio, and luckily the faith the neighbors placed in him stopped abruptly.

When James moves into a garage in Antonio's neighborhood, all the young boys become intrigued by him.  He is an older boy, living on his own, who can do basically anything he wants and also has dirty pictures hanging on the garage walls.  The boys are drawn to James because he enjoys spending time with Antonio and his friends, and doesn't treat them like children.  James has a dark side that he tries to keep hidden from Antonio, but unfortunately some of Antonio's friends become corrupted by James charms.

A murder takes place in the beginning of the novel, setting the tone for discord and danger.  Marsh did a great job of narrating this book, bringing to life Antonio's character while allowing me to recall precious memories from my own childhood.  With themes of murder, faith, and friendship, you may enjoy this book as much as I did.  Even though this is considered a Young Adult novel I don't hesitate in recommending this book to anyone for either personal leisure or as a book club discussion.

Disclosure:  This audiobook was provided to me by the publisher through the Audiobook Jukebox program in exchange for an honest review.
Posted by Jo-Jo at 7:30 AM

That sounds like a page turner. I wonder if any of it is based on a true story.