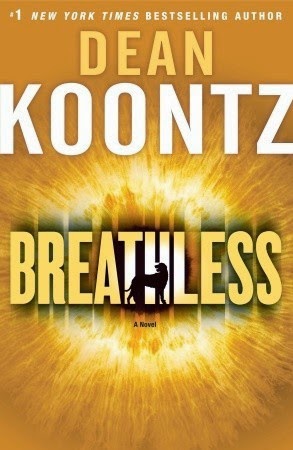 
Here is a summary of the book from the Goodreads website:
In the stillness of a golden September afternoon, deep in the wilderness of the Rockies, a solitary craftsman, Grady Adams, and his magnificent Irish wolfhound Merlin step from shadow into light…and into an encounter with enchantment. That night, through the trees, under the moon, a pair of singular animals will watch Grady's isolated home, waiting to make their approach.

A few miles away, Camillia Rivers, a local veterinarian, begins to unravel the threads of a puzzle that will bring all the forces of a government in peril to her door.

At a nearby farm, long-estranged identical twins come together to begin a descent into darkness…In Las Vegas, a specialist in chaos theory probes the boundaries of the unknowable…On a Seattle golf course, two men make matter-of-fact arrangements for murder…Along a highway by the sea, a vagrant scarred by the past begins a trek toward his destiny…

In a novel that is at once wholly of our time and timeless, fearless and funny, Dean Koontz takes readers into the moment between one turn of the world and the next, across the border between knowing and mystery. It is a journey that will leave all who take it Breathless.

My Review:
Back in my mid-twenties I devoured Koontz novels like they were going out of style.  I do still enjoy them once and awhile, but I found more enjoyment lately from the audio versions.  Although this novel had a creepy murderer, as most of his books do, it did not seem to reach the level of intensity I expect from Koontz.  Usually this intensity stems from the actions of a psychopath, so this novel offered a more relaxed tone.

The book follows the narratives of several different characters.  The various characters come from different parts of the country and various walks of life.  Grady could not have imagined that his stumbling upon two magnificent creatures frolicking on his land would bring them all together.  The appearance of the creatures creates a sea of change, but unfortunately, not everyone involved has good intentions.

When Grady discovers the creatures he contacts his friend Camilla, who is also a veterinarian, to see if she knows anything about them.  She is amazed by Grady's discovery, and after referring to a colleague, the government swoops in, trying to take control of the situation.  Grady and Camilla fine themselves doing whatever is necessary to protect these two magnificent creatures.

Cummings did a good job narrating, considering there were many characters he needed to bring to life for us.  My biggest complaint with this novel was that there were too many characters to learn as new ones were even introduced within the last couple of discs.  With themes of unexplained beings, conspiracy, and evil, you may enjoy this book as much or even more than I did.  I recommend this book for personal leisure or for book clubs that enjoy reading books with an extra-terrestrial content.

Disclosure:  I borrowed this audiobook from the local library for my own entertainment.
Posted by Jo-Jo at 7:30 AM

Koontz's books are hit or miss for me. I'll probably skip this one.

Like you, I blew through all of his books when I was in my twenties. I'd ran out of King books one day and turned to Koontz. I met him too! He is a really nice guy but lately, his books seem too commercially popular to me. I feel as if the books are put out, knowing that they'll sell based on his name alone, not really what's on the pages in between. The most recent books I have read of his is Innocence and man, it sucked!

Ahhhh! You were reading Koontz when I was a big fan too. I still enjoy him and liked this one when it came out, although I find I prefer his older books.