Blog Tour and Review: The Bully of Order by Brian Hart 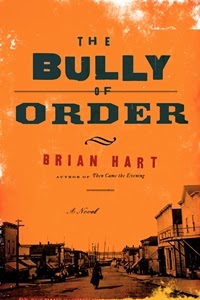 Thanks once again to Trish from TLC Book Tours for inviting me to be a part of this tour. I'm sure I would not have picked this book up on my own otherwise.

Here is a summary of the book from the publisher's website:
Set in a logging town on the lawless Pacific coast of Washington State at the turn of the twentieth century, a spellbinding novel of fate and redemption—told with a muscular lyricism and filled with a cast of characters Shakespearean in scope—in which the lives of an ill-fated family are at the mercy of violent social and historical forces that tear them apart.

Keen to make his fortune, Jacob Ellstrom, armed with his medical kit and new wife, Nell, lands in The Harbor—a mud-filled, raucous coastal town teeming with rough trade pioneers, sawmill laborers, sailors, and prostitutes. But Jacob is not a doctor, and a botched delivery exposes his ruse, driving him onto the streets in a plunge towards alcoholism. Alone, Nell scrambles to keep herself and their young son, Duncan, safe in this dangerous world. When a tentative reunion between the couple—in the company of Duncan and Jacob’s malicious brother, Matius—results in tragedy, Jacob must flee town to elude being charged with murder.

Years later, the wild and reckless Duncan seems to be yet another of The Harbor’s hoodlums. His only salvation is his overwhelming love for Teresa Boyerton, the daughter of the town’s largest mill owner. But disaster will befall the lovers with heartbreaking consequences.

And across town, Bellhouse, a union boss and criminal rabble-rouser, sits at the helm of The Harbor’s seedy underbelly, perpetuating a cycle of greed and violence. His thug Tartan directs his pack of thieves, pimps, and murderers, and conceals an incendiary secret involving Duncan’s mother. As time passes, a string of calamitous events sends these characters hurtling towards each other in an epic collision that will shake the town to its core.

My Review:
Let me start by saying this was a very interesting novel giving you an honest look at life in a logging town at the height of the industry.  Hart shared with us the raw and primal lives of the people of this community as they lived day to day.  With that being said, I need to warn you that this book is definitely not for the faint-hearted.  But if you are looking for an honest glimpse into this piece of history, then this novel is for you.

There are a lot of characters in the book and different chapters offer narrations for several characters.  I was impressed with Hart's ability to introduce new characters to us, because even though they have similar needs within the community, they all come from different walks of life.  We learn about Jacob, who works hard his whole life but makes bad decision after bad decision.  Then there is his son Duncan, who is an unfortunate victim of circumstance.  Jacob's wife, Nell, who blindly followed him to this wild country in search of a better life, only to be cast aside by the community because of her husbands actions.  These are just a few of the characters in the novel with just a fraction of their personal predicaments.

Besides Jacob's lies about who he really is, his brother Matius has a downright evil streak.  When Jacob seems to be getting things back on track with his family, Matius does something that will shatter Jacob's family as he knows it.  The Ellstrom family will never be the same and young Duncan can't help but be drawn down a dark path of his life.  Violence becomes a normal part of Duncan's life, and he can't help but embrace his violent tendencies when things do not work out as planned.

This book was kind of a slow read for me as it was packed with vivid details and information.  One of the most difficult chapters for me to read was about Jacob when he was in a very dark time of his life, probably drunk most of the time.   That chapter was so scattered that I couldn't help but compliment the author, because I imagine these thoughts could be pretty accurate for a man in his circumstances.

For those that are history buffs and interested in the early logging industry, this book would be right up your alley.  With themes of family, secrets, lies, and survival you may enjoy this book too.  I recommend this novel for either personal leisure or as a book club discussion.

Disclosure:  This book was provided to me by the publisher to participate in this blog tour and provide an honest review.
Posted by Jo-Jo at 5:00 AM

I so admire an author who can convey the inner thoughts of a troubled mind, and it sounds like this author does just that!

Thanks for being a part of the tour.