Blog Tour and Review: The Last Queen by C.W. Gortner 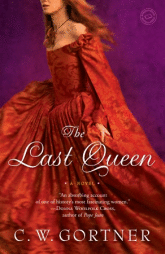 I am so excited to participate in the blog tour for The Last Queen by C.W. Gortner! Here is a summary of the book from the Random House website:

In this stunning novel, C. W. Gortner brings to life Juana of Castile, the third child of Queen Isabel and King Ferdinand of Spain, who would become the last queen of Spanish blood to inherit her country’s throne. Along the way, Gortner takes the reader from the somber majesty of Spain to the glittering and lethal courts of Flanders, France, and Tudor England.

Born amid her parents’ ruthless struggle to unify and strengthen their kingdom, Juana, at the age of sixteen, is sent to wed Philip, heir to the Habsburg Empire. Juana finds unexpected love and passion with her dashing young husband, and at first she is content with her children and her married life. But when tragedy strikes and she becomes heir to the Spanish throne, Juana finds herself plunged into a battle for power against her husband that grows to involve the major monarchs of Europe. Besieged by foes on all sides, Juana vows to secure her crown and save Spain from ruin, even if it costs her everything.

I wasn't really sure what to expect from this book as I haven't read a lot of historical fiction, and this is the first that I have read from this time period. Thanks to C.W. Gortner, I am now a true fan! This was a beautifully written book that was packed full of information that kept me wanting to read more.

One thing this book proved for me is that politics have always been a driving force in society. Arranged marriages have been quite common in some of the previous novels that I have read, but in the case of The Last Queen, marriages were arranged for the purpose of royalty to gain significant power. Juana of Castile knew early on of her future betrothal to Philip of Flanders, but decided to not focus on that part of her life. She thought that so many different things could happen in the future that could change this course of events.

The royal betrothal to Philip does take place and Philip and Juana develop a very passionate attraction to each other. Although Juana gives herself fully and emotionally to her new husband, that doesn't seem to be enough to satisfy all of his needs. Juana has a brother and sisters that have all been promised to royalty that would extend the alliances with Spain. Even though her mother, Isabel of Castile was born of the royal blood to rule the country, I don't think that Juana was expecting that this honor would be passed down to her.

As it was becoming more apparent that Juana would more than likely have to follow in her mother's footsteps as Queen, her husband Philip gets a glimpse of the power that he could have if he were to become the King of Spain. Since Juana has the royal blood running through her veins, the only way for him to become the King of Spain would be to defeat her by making her give up her crown and turning her back on the country she loves.

C.W. Gortner's writing just made this story so vivid within my imagination. I love how he connected the courts of England, France, and Spain and weaved important historical events into the story that helped me with a timeline. Juana of Castile was portrayed as such a passionate Queen that was willing to do just about anything for her country. To think of what she went through with not only her husband, but other family members, all for the love and welfare of Spain is just amazing.

I want to thank Dorothy from Pump Up Your Book Promotion for allowing me to participate in this virtual tour. I loved this book and look forward to reading future work by C.W. Gortner. To find out more information about Gortner please check out his website here. This novel is full of passion, intrigue, tragedy, loyalty, secrets, and deception that will hold your attention until you turn the final page. As you can see by my rating below, in the genre of historical fiction this book is one of my favorites.

**Want to win a copy of The Last Queen for yourself? Serena at Savvy Verse and Wit is running a giveaway that you can enter until May 22nd.

This book sounds great :)
I do wanna read it

I love this book too, such a good read. I plowed through it in 3 days, good review

Will have to add this to my TBR list - I've just been very into historical fiction lately!

The Last Queen sounds fabulous - I'm glad you enjoyed it so much.

This sounds great, thanks for the review!

Thanks for the super review!!! ;o)

Great review, Jo-Jo! I had given it 5 Stars as well.. and CW Gortner composed a Guest Post which is really interesting at The Burton Review. The tour links are posted there also for the month of May.
If you are new to HF, I must recommend some of Holt's historicals and Jean Plaidy (both a penname for Eleanor Hibbert). They are so well-written but you learn a lot of history as well, and she wrote so many books you have tons of eras to choose from.

I want the dress on the cover!

Thanks! Headed over now to check out her review, too.

Thanks so much, Jo-Jo, for this fantastic review and for being a host on my virtual blog tour. I do hope your readers will enjoy the book!

Good review - this is a very good novel, a well-researched page-turner. There's a review as well as an author interview with C.W. Gortner at my Historical Novels website: www.HistoricalNovels.info. Scroll down to the May 5 post for the interview and a link to the review. And now that you're a fan of historical fiction, you might enjoy browsing the website, which has over 5000 listings of historical novels, plus over 100 reviews!

I've heard nothing but good things about this book. Glad you enjoyed it, too.

I'm glad you liked this one Jo-Jo. I'd love to read it one of these days.

Great review! I have been wanting to read this one.

Passages to the Past said...

I've read this one twice in the past 6 months and it was even better the second time around!! I love Gortner's writing and look forward to his next novel on Catherine de Medici!

I read your comment on Popin's Lair's teaser and had to find your review of this book. It sounds great!!

I haven't read any books from the era or region but I love historical fiction so I'm thinking I would really like to try this one. I loved your review and appreciate your recommendation.