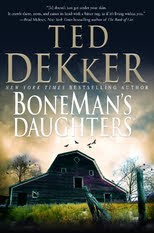 Here is a summary of BoneMan's Daughters by Ted Dekker from his website:

They call him BoneMan, a serial killer who’s abducted six young women. He’s the perfect father looking for the perfect daughter, and when his victims fail to meet his lofty expectations, he kills them by breaking their bones and leaving them to die.Intelligence officer Ryan Evans, on the other hand, has lost all hope of ever being the perfect father. His daughter and wife have written him out of their lives.

Everything changes when BoneMan takes Ryan’s estranged daughter, Bethany, as his seventh victim. Ryan goes after BoneMan on his own.

But the FBI sees the case differently. New evidence points to Ryan being BoneMan. Now the hunter is the hunted and in the end only one father will stand.

My Review:
Now this is probably the most intense audiobook I have listened to yet. The main reason that I listened to this one, was to fullfill one of the slots in the What's in a Name Challenge. I've read a few reviews of this book, but considering that I don't usually read suspense thrillers I guess I just wrote it off in my mind. I'm thankful that my mind went back to this title when I was trying to think of a book with a 'body part' in the title.

Ryan Evans is a career naval intelligence officer who found himself pursuing his career and at the same time abandoning his family in the process. He's given his best years to his country, leaving his wife and daughter on their own trying to build a somewhat normal life without him. During a mission in Iraq he has a life changing experience that has him re-evaluating the decisions that he has made about his family, and finds that he regrets every one of them. He wants his family back and decides that he will return home to fight for their love.

When Ryan returns home he finds that his wife and daughter are not quite so eager to welcome him back into their lives with open arms. During his long absence his wife actually found comfort in the arms of another man, and his daughter Bethany just learned to live her life on her own, which she found very lonely at times.

BoneMan is the psycho murderer in this novel that enjoys preying on young girls. One might think that he had a sexual interest in these girls, but that was the furthest thing from his mind. His quest was to find a girl that was perfect enough to be his daughter. After abducting a girl and finding that she didn't measure up to his standards, that is when he would proceed to break their bones, which would result in their death.

Boneman was very meticulous when it came to his looks and even his victims. He would be sure to break each bone with just the right amount of pressure that would ensure the bone would not break through the skin. He wanted his victims to look unscathed. As far as his own upkeep went, he religiously used his Noxzema skin cream every day.

The novel really sped up when BoneMan abducted Bethany thinking that she would be his perfect daughter. With the family conflict surrounding Ryan Evans, the authorities started to suspect him as the BoneMan. When there wasn't any evidence to prove that Ryan wasn't BoneMan, he knew that he was going to be Bethany's only chance at being rescued from that psychopath. Ryan vowed that he would do whatever he needed in order to save his daughter so he could be with her again.

This novel really will get your blood pumping. When I listened to this in my car I remember there being times I was gripping my steering wheel so tightly that my knuckles turned white! Then there were a few times that really were just, shall I say 'icky', when I would just wave my hands in the air and yell. Oh, what people must think of me when they see me driving sometimes! The gentleman that narrated this book also did a great job, as he made the creepy parts of this novel creepier yet! I definitely recommend this one if you are a fan of the thriller/suspense genre. And if you don't usually read this genre, but are looking for something different, you may enjoy this as much as I did.

Disclosure:  I borrowed this book from the library to listen to for my own entertainment.

You can check out more great reviews at Cym Lowell's Book Review Party Wednesday.
Posted by Jo-Jo at 8:00 AM

Ooh, this sounds like a great listen. I just started doing audiobooks, so I'll have to watch out for this one at the library.

I read this book and don't think I could handle it in audio. I'm glad to see you enjoyed it so much.

This kind of plot lends itself well to this format but I had a problem with the reader. His "mom" voice and the voice he used for the daughter drove me batty.

I had a hard time with some of the more graphic parts of this book, but I also don't read alot of thrillers.

I also listened to the audio book of this one, and although I liked it, I thought The Kiss was better. Have you read that book by Dekker? (I've only read these 2, but am looking forward to more by Dekker).

I read the book for this one and really liked it. I have the audio as well but haven't had a chance to take a listen yet. Glad you liked it.

I love audiobooks and I need to try a Dekker book. Thanks for the great recommendation.

Gosh, this sounds so intense!! Really enjoyed your review but I'm not too sure about the "ick" parts, I find them hard to shake off.

I'm glad to hear that you liked this book. It is probably one of my favorites for this year and I also like Dekker a lot. i think he's a clever author.

I can totally visualize you doing icky parts, because my face scrunches up just thinking of icky things. Eww!
Excellent review and glad it lived up to expectations. I read so manuy great things about this book.