The book that most recently caught my eye is The Last Dickens by Matthew Pearl that I found at both Book Chatter and Other Stuff and Bookish Ruth. 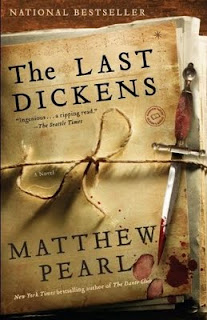 Here is a summary of the book from the Random House website:

In his most enthralling novel yet, the critically acclaimed author Matthew Pearl reopens one of literary history’s greatest mysteries. The Last Dickens is a tale filled with the dazzling twists and turns, the unerring period details, and the meticulous research that thrilled readers of the bestsellers The Dante Club and The Poe Shadow.

Boston, 1870. When news of Charles Dickens’s untimely death reaches the office of his struggling American publisher, Fields & Osgood, partner James Osgood sends his trusted clerk Daniel Sand to await the arrival of Dickens’s unfinished novel. But when Daniel’s body is discovered by the docks and the manuscript is nowhere to be found, Osgood must embark on a transatlantic quest to unearth the novel that he hopes will save his venerable business and reveal Daniel’s killer.

Danger and intrigue abound on the journey to England, for which Osgood has chosen Rebecca Sand, Daniel’s older sister, to assist him. As they attempt to uncover Dickens’s final mystery, Osgood and Rebecca find themselves racing the clock through a dangerous web of literary lions and drug dealers, sadistic thugs and blue bloods, and competing members of Dickens’s inner circle. They soon realize that understanding Dickens’s lost ending is a matter of life and death, and the hidden key to stopping a murderous mastermind.

So did anything catch your eye this last week?

Here is my Friday Find: Ghostwritten by David Mitchell

This one appeals to me as well!

Thanks for the shout-out! I really enjoyed the book and I am enjoying all of Matthew Pearl's guest posts too. He has been posting them on Facebook so become a fan if you are on there.

I've read several great reviews of this one, including Ti's!

I think I started reading one of Pearl's books ('The Rule Of Four) and I actually didn't like it, I think I even didn't finish but maybe I'll give him a chance with this one.

This one caught my eye too!

This one has caught my attention the last little while as well.

A play on Charles Dickens? Sounds like a hoot!

Thanks for pointing out this one. It looks very good.

I have read about this one a lot this last month :)

I love that cover of The Last Dickens, I have one of his other books (Poe Shadow?) that I have yet to read but looks good as well.