Review: The Age of Orphans by Laleh Khadivi 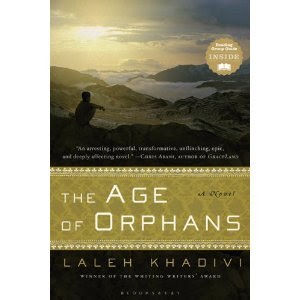 Here is a summary of The Age of Orphans from the Bloomsbury website:

Kurdistan, Persia. A village high in the Zagros mountains. A small green-eyed boy wrestles free from his mother and climbs atop a straw and mud hut to gaze at the dusty landscape; the jagged mountains and azure sky, the cattle in the distance. With his arms stretched out beside him he pretends to be a bird, to lift up and soar over this land: the land of his fathers and forefathers. Kurdish land.

Soon after the boy is ritually initiated into manhood, messengers from the hills bring whispers of war; rumours that the Shah’s army is moving from village to village, stamping out any tribal rebellion that may stand in the way of the creation of a unified ‘Iran’. Just nine years old, the boy must stand alongside his men and fight for their land.

Years later, Reza Pahlavi Khourdi can only faintly recall the brutal murder of his father and cousins. Orphaned on the bloody battlefield, conscripted into the great column of the army and given a new name, he has quickly risen up the ranks, proving both his prowess in battle and allegiance to the Shah’s troops. Now in Tehran, Reza is about to marry to a beautiful, educated, city girl, and become a Capitian.

But there are stirrings within his heart. He will soon move west to be the Shah’s servant in Kermanshah, the land of his birth, and a figurehead of modernization.

At once rich and bleak, The Age of Orphans unleashes a tapestry of untold horrors and pleasures, of blood and smoke, hopes, dreams and desires. It is a profound and darkly poetic story of a land roughly sewn together under the ambitious imagining of a nation, and of the life of a boy whose identity does not - can not - unite with this vision.

My Review:
I will start off by saying that the writing in this novel was just beautiful as it seemed to me to have almost a poetic prose to it.  We are taken through the life of a Kurd from the time he is a young boy living in his village in Courdestan with his family to the time that he is an old man that has been brought full circle through a life of disappointment and changes.

I don't recall knowing what the young boy's name was at the beginning of the novel, but he is introduced as a young boy yearning to be accepted as an adult by members of his village.  When it is finally his turn to be taken on a journey with the men of the village to become a man he is thrilled beyond words.  Although it wasn't clear to me exactly what age he was, it seemed that he was only about eight years old, but upon his return from the ceremony he would be considered a man by all.

He finds many benefits come with being a man-people look at you with respect, he gets to pick on the little boys in the village, and girls look at you with yearning eyes.  He is quite distraught when he realizes that as a man he can no longer feed from his mother's breast.  This I will admit is my main problem with the novel.  That he has such a problem as a young man and even into adulthood dealing with the fact that he will no longer taste the milk that his mother has to offer.

When he is later captured by the Shah's army he loses all sense of tradition and worth that he learned in his Kurd village.  He finds himself turning into a person that the people in his village have learned to fear and it seems to me that he was just an empty shell doing what he needed to do to survive.  Before you know it he becomes a favorite amongst the Shah's army officials and he advances quickly within the ranks.  As a young adult and a faithful servant of the Shah he is sent to restore order to a small Kurd village.  It is in this small village when he starts to reminisce about the life he has lost and question the decisions that he has made along the way.

Besides the one problem that I had with this novel I really enjoyed it otherwise.  I found the second half of the book was a much more enjoyable experience for me.  With themes of traditions and belonging this made for a very interesting story.  Even though I was not enjoying the story fully in the beginning I could not put it down because I found the writing so beautiful.  I do believe that many book clubs would also enjoy this book as there are some great discussion topics within the pages, but be aware that a more 'reserved' group may be put off by some of the content.

Disclosure:  This book was sent to me from Bloomsbury as part of the First Reads program through LibraryThing in exchange for an honest review.

If you are interested in reading more book reviews you should check out the Book Review Party Wednesday at Cym Lowell's Blog!
Posted by Jo-Jo at 7:41 AM

Hm, I can understand why you had a problem with the book - I wonder if that's a cultural thing?

I think the problem there is it is a cultural thing. Several cultures around the world have children suckling from their mother for much longer than Westerners have their children do it. While we have our reasons for not doing it, they have their reasons for doing it. It would be interesting to research this and find out about it more.

I think I would like to read this book.

Interesting. Not the type of book I normally pick up and I learned so much just from your review that I think it might be enough :)