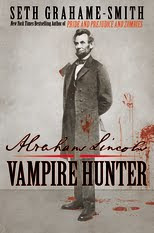 Here is a summary of Abraham Lincoln: Vampire Hunter from the Hachette website:

Indiana, 1818. Moonlight falls through the dense woods that surround a one-room cabin, where a nine-year-old Abraham Lincoln kneels at his suffering mother's bedside. She's been stricken with something the old-timers call "Milk Sickness."

"My baby boy..." she whispers before dying.

Only later will the grieving Abe learn that his mother's fatal affliction was actually the work of a vampire.

When the truth becomes known to young , he writes in his journal, "henceforth my life shall be one of rigorous study and devotion. I shall become a master of mind and body. And this mastery shall have but one purpose..." Gifted with his legendary height, strength, and skill with an ax, Abe sets out on a path of vengeance that will lead him all the way to the White House.

While Abraham Lincoln is widely lauded for saving a and freeing millions of slaves, his valiant fight against the forces of the undead has remained in the shadows for hundreds of years. That is, until Seth Grahame-Smith stumbled upon The Secret Journal of Abraham Lincoln, and became the first living person to lay eyes on it in more than 140 years.

Using the journal as his guide and writing in the grand biographical style of Doris Kearns Goodwin and David McCullough, Seth has reconstructed the true life story of our greatest president for the first time-all while revealing the hidden history behind the Civil War and uncovering the role vampires played in the birth, growth, and near-death of our nation.

My Review:
After hearing so many good reviews of this book I decided to go ahead and give it a try with the audio version.  It really was full of interesting historical facts of Abraham Lincoln's life, including his climb up the political ladder, which ended in his Presidency.  It was very unfortunate that all of the women in Abe's life were taken from him (except for the woman he married), although history gives a more medical definition for the deaths of these women, this novel accounts these deaths to vampires.

As a young man Abe finds himself befriending a man named Henry, who he learns is actually a vampire.  Henry teaches Abe everything he knows about vampires, including how to hunt and kill them.  I don't think that Abe ever actually understood why Henry would take the time to teach him how to kill one of his own, but he follows Henry's lead in an attempt to seek vengeance on his mother's death.

This book follows Lincoln's political career including when he was elected as a state legislator to the President of the United States.  Along his journey tales of vampire hunting are weaved within the storyline.  We are shown a close look at how slavery apalled Lincoln and within the novel he even blames the circumstance of slavery on the vampires.  Certain events that had taken place during the civil war were also attributed to the vampires within the pages of this book.

I did appreciate many of the facts that were included in this novel, but I must admit that I really was expecting more humor.  It was not humorous in any way and many parts were very graphic and grotesque.  Although this wasn't my favorite audiobook I did appreciate the historical elements the book had to offer.  This audiobook was narrated by Scott Holst.

Disclosure:  This was my own audiobook that I listened to for my own entertainment.

You can check out more great book reviews over at Cym Lowell's Book Review Party Wednesday.
Posted by Jo-Jo at 7:53 AM

Now I can't remember if I commented or not, hm. Should not have to many tabs open ;)

But yes this book sounds so cool

I liked this book, but read the paper copy, so was able to skip over some of the more vivid descriptions. (and, I think, read in some more very dry humor)

I'm glad you enjoyed this - I don't think it's for me at all.

Why did you expect humor-I am not sure what I expected but it wasn't humor-I enjoyed the historical facts within the book.

Blodeuedd: It was a neat book that did seem to keep my attention.

Texas: I think if I were to actually read it i would have also added some dry humor to it.

Kathy: I did find some enjoyment out of it but it is definitely not for everyone.

Esme: I have no idea why I expected humor, but the cover just seemed so unrealistic it made me laugh...and still does! lol

I'm glad to have read this review. This book is on my TBR and I was absolutely expecting there to be humor in it. Good to know it is on the more graphic side (not sure that's what I'm looking for) before I picked it up.

Wally: I'm glad I'm not the only one that was expecting humor! lol