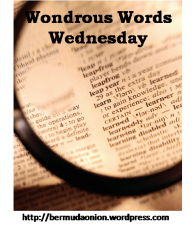 Here are a couple of new words that I learned while reading The Passage by Justin Cronin:
Tumescent: swelling; slightly tumid.

Here is how tumescent was used on page 65:
The air of the room was as tumescent as a greenhouse; everyone was dancing and shuffling and clapping along, a crowd of people of all ages and colors.

Coterie:  a group of people who associate closely.

Here is how coterie was used on page 173:
They'd been separated the minute they landed, Amy hustled away by Richards and a group of armed soldiers, Wolgast and Doyle with a coterie of their own-but then they'd been split up, too.

Oscilloscope:  a device that uses a cathode-ray tube or similar instrument to depict on a screen periodic changes in an electric quantity, as voltage or current.

Here is how oscilloscope was used on page 313:
In the shed, piled among the old CRT's and CPU's and plasmas and bins of cell phones and Blu-rays, was an old stereo receiver-just AM and FM bands, but he could open that up-and an oscilloscope.

Well those are the new words that I learned last week..did you come across any new words?
Posted by Jo-Jo at 7:20 AM

I would have guessed coterie had something to do with doves - don't ask me why. Great words! Thanks for playing along.

I've heard of the second, but not the first. Thanks for the new word.

I read your Wondrous Words Wednesday posts quite often!
This is my first time participating, as I just started my blog.

These are some awesome words, Jo-Jo! I especially like coterie, the sound of it really appeals to me. Oscilloscope is completely new for me. I am hoping I remember its definition by the time I read The Passage. I'm hoping to start it soon!