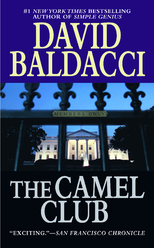 
Here is a summary of book from the Hachette website:

Welcome to THE CAMEL CLUB.Existing at the fringes of Washington, D.C., the Club consists of four eccentric members. Led by a mysterious man known as "Oliver Stone," they study conspiracy theories, current events, and the machinations of government to discover the "truth" behind the country's actions.Their efforts bear little fruit-until the group witnesses a shocking murder...and become embroiled in an astounding, far-reaching conspiracy. Now the Club must join forces with a Secret Service agent to confront one of the most chilling spectacles ever to take place on American soil-an event that may trigger the ultimate war between two different worlds. And all that stands in the way of this apocalypse is five unexpected heroes.

My Review:
The Camel Club is the first novel in a series by David Baldacci that introduces us to an extraordinary group of individuals that have their own way of trying to keep our country safe, even from people that would not usually be suspected.  Jonathan Davis narrated this audiobook and did a great job of building the action and suspense within the novel.

There are many characters that are introduced within the book, but Oliver Stone, who also leads the Camel Club is the character that we get to know the most.  Stone is quite a mysterious man as he doesn't seem to have a past but yet knows many of the in's and out's of secret government issues.  When the Camel Club gathers for a meeting in the beginning of the novel, they unfortunately witness a murder, which lands them knee deep in the middle of a conspiracy that will add excitement to all of their lives.

Shortly after the murder takes place, we learn about a plot to kidnap the President of the United States.  Plans have been in place by a terrorist organization that include people that have been working as nannies to medical doctors.  Once the President is kidnapped the Secret Service picks up a trail that somehow leads them right in the path of Oliver Stone and the rest of the Camel Club.

These events are somehow linked to the conspiracy and the Camel Club finds themselves working with the Secret Service to unravel the mystery.  As I indicated, this audiobook is full of action and suspense to keep your attention through most of the book.  I did find my attention wavering in a few parts, which is why I am going to give this audiobook just an average rating.  I'm sure that Baldacci fans will eat this one up though!

Disclosure:  I borrowed this audiobook from my local library and listened to it for my own entertainment.
Posted by Jo-Jo at 7:57 AM

I have not read this series but have known lots of Baldacci fans who loved them! I have only read The Winner and I loved it!

I really like this series - maybe it's better in print.

LOL - I'm CHEWING you up...actually not...it was an average book as I also found myself wandering at many parts. The Baldacci book I have now (One Summer) is by far one of my fav Baldacci's yet and I've read many :)