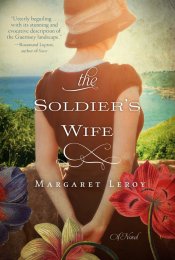 Here is a summary of The Soldier's Wife from the Goodreads website:

As World War II draws closer and closer to Guernsey, Vivienne de la Mare knows that there will be sacrifices to be made. Not just for herself, but for her two young daughters and for her mother-in-law, for whom she cares while her husband is away fighting. What she does not expect is that she will fall in love with one of the enigmatic German soldiers who take up residence in the house next door to her home. As their relationship intensifies, so do the pressures on Vivienne. Food and resources grow scant, and the restrictions placed upon the residents of the island grow with each passing week. Though Vivienne knows the perils of her love affair with Gunther, she believes that she can keep their relationship and her family safe. But when she becomes aware of the full brutality of the Occupation, she must decide if she is willing to risk her personal happiness for the life of a stranger.


My Review:
I can't tell you how thrilled I was to receive this ARC in the mail.  After reading a previous novel that took place during the German Occupation on the Island of Guernsey, I couldn't wait to return there through the pages of The Soldier's Wife.  We follow Vivienne's life during this hard time after making a life-changing decision to stay on the Island when so many others are fleeing.

Vivienne lives in a more rural area of Guernsey, but not far from a village that contains all of their basic needs.  Since her husband has joined the army and has left to fight against the Germans, she finds herself having to spend all of her energy and strength over the next couple of years to care for her aging mother-in-law and her two young daughters.  I found admiration in my heart for Vivienne as she raises these girls, one on the verge of becoming a young lady, during such turbulent times.  Raising children is a hard job and I can only imagine what it would be like without the support of a husband and father by your side.  Not only for emotional needs, but for basic survival needs as well.

The Germans take over the Island in such a brutal and swift manner that leaves many fatalities including some of her close friends.  Once the Germans have control Vivienne seems to be unsure of the intentions of this enemy, as she sees many of them shopping in the same stores that she shops, and some even dating friends of her teenage daughter.  This seems to send a mixed message to Vivienne and as she has problems understanding where her loyalty actually lies.

Since many of the Island residents have deserted their homes in a search for safety, it is easy for the Germans to find random houses to occupy during this period of time.  It just so happens that the home right next to Vivienne's becomes occupied by a squad of German soldiers.  As she catches glimpses of these soldiers from time to time she seems to let down her guard against them as she is able to see that they are actually human just like her.  Before you know it she develops a special friendship with Gunther, a German captain, and they begin to count on each other for companionship.

I must admit to you that when I first started this book I was not appreciating the story that was unfolding before me.  But then I realized that although I didn't enjoy the premise of the novel, I couldn't put it down!  I let my mind explore what this situation would be like for a young woman caring for an elderly woman and two young children.  A person does what one needs to do in order to survive, even if it is seeking solitude and comfort from the most unlikely of strangers.

This novel turned out to be so much more than I expected it to be.  Vivienne must find the strength and courage to do things that put both her reputation and her life at risk.  Some readers may find that many of her actions were wrong, but when it counted, she did what needed to be done.  I found myself enjoying this novel, although it did leave me a bit unsettled, but I feel that good books will do that to you from time to time.  With themes of love, courage, war, and perseverance I believe that this book would be great for a book club discussion or for personal leisure.

Disclosure:  This book was provided to me by the publisher in exchange for an honest review through the LibraryThing Early Reviewers Program.

You can check out more great book reviews over at Cym Lowell's Book Review Party Wednesday!
Posted by Jo-Jo at 7:51 AM

Sounds like this one packed a punch, and you were hit without realizing it. ;) I can't wait to read it. I will add your review to War Through the Generations soon.

This sounds like a powerful, thought provoking book. I hope I never have to find out what I would do in those circumstances.

Wonderful review! I liked this book a lot and didn't fault Vivienne for her actions. I'm sure Gunter did not choose to go to war - he was doing his job without becoming a savage like so many of them did. Actually, I felt sorry for both of them under the circmstances.

I am often surprised by how much I can like a book even though the premise does nothing for me. It has to be the writer's skill, don't you think?

This one has made it to my TBR list; you aren't the only one giving it a good review.