Blog Tour and Review: The Traitor's Wife by Kathleen Kent 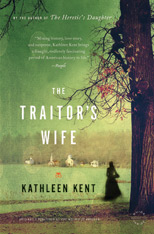 I was very excited to be a part of this blog tour as I thoroughly enjoyed reading The Heretic's Daughter by Kathleen Kent.  Even though The Traitor's Wife is the second novel by Kent, it is actually a prequel to The Heretic's Daughter. I also want to give a special Thank You to Anna from Hachette for inviting me to be a part of this special blog tour!

In the harsh wilderness of colonial Massachusetts, Martha Allen works as a servant in her cousin's household, taking charge and locking wills with everyone. Thomas Carrier labors for the family and is known both for his immense strength and size and his mysterious past. The two begin a courtship that suits their independent natures, with Thomas slowly revealing the story of the role he played in the English Civil War. But in the rugged new world they inhabit, danger is ever present, whether it be from the assassins sent from London to kill the executioner of Charles I or the wolves-in many forms-who hunt for blood. At once a love story and a tale of courage, The Traitor's Wife confirms Kathleen Kent's ability to craft powerful stories from the dramatic background of America's earliest days.

My Review:
In The Traitor's Wife, Kent takes us back even further in history than she did in The Heretic's Daughter.  We are taken back to 1649 England in an effort to help us understand why Thomas Carrier fled from that country and tried to live as secretly as possible when arriving in America.

Martha Allen is already living in America with her family, and as a young woman her father only hopes that she will marry soon.  He sends her away to help her pregnant cousin Patience maintain her household, but little does Martha know that she will be treated like a common slave upon her arrival.  It is at her cousin's home where Martha crosses paths with Thomas Carrier, and it is only a matter of time until they become one anothers friend and confidant.

A good portion of this story is about Thomas Carrier and the secret of his past that will follow him for the rest of his life.  I will not give this part of the story away, except to say that it really was sad that this conspiracy against Thomas would always follow him.  I couldn't help recalling the story of The Heretic's Daughter and realizing that Thomas' secrecy, along with Martha's no-frills attitude and her home remedies, helped persuade all of the neighbors to convict her as a witch.

Life for Martha was hard as she tried to help her cousin the best that she could.  Patience very quickly makes it known that she is the woman of the house and everyone will abide by her rules.  When Martha makes suggestions or blends a special concoction of herbs to make the pregnancy easier for Patience, she finds that Patience no longer trusts her and even thinks that Martha may be harboring ill feelings or spells towards her.  I can only imagine how hard life was back then and to add a long and cold winter on top of it, yikes!  I'm sure it wouldn't take much for tempers to flare.

I loved how this story was written in a way that showed how gentle, but yet strong Thomas was.  Although we know the hardships that Martha endured during this time, I feel that I came to know Thomas more for some reason.  This was a great story with themes of love, secrecy, and loyalty that would make for either a great book club selection or to read for personal leisure.

Disclosure:  This e-book was provided to me by the publisher through the Netgalley program in exchange for an honest review.

I still haven't read The Heretic's Daughter! I want to read both books.

Glad to see you enjoyed it. I think I have a copy of The Heretic's Daughter somewhere and must make time to read it.

I'm so glad to see this is so good! I'll add your review to the Reagan Arthur Books Challenge.

I enjoyed the first book by this author, and have an eBook of this one. Thought your review was very good Jo Jo.

I haven't read any of these, but they look so good! I really want to read them though.