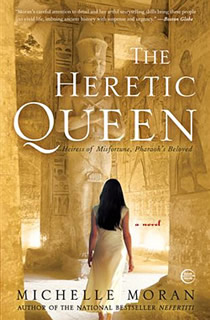 Here is a summary of The Heretic Queen from Michelle Moran's website:

In ancient Egypt, a forgotten princess must overcome her family’s past, and remake history.

The winds of change are blowing through Thebes. A devastating palace fire has killed the 18th dynasty’s royal family— all with the exception of Nefertari, niece of the reviled former queen Nefertiti. The girl’s deceased family has been branded as heretical, and no one in Egypt will speak their names. A relic of a previous reign, Nefertari is pushed aside, an unimportant princess left to run wild in the palace. But all of this changes when she is taken under the wing of pharaoh’s aunt, and brought to the Temple of Hathor where she is educated in a manner befitting a future queen.


Soon Nefertari catches the eye of the crown prince, and despite her family’s history, they fall in love and wish to marry. Yet all of Egypt opposes this union between the rising star of a new dynasty and the fading star of an old, heretical one. While political adversity sets the country on edge, Nefertari becomes the wife of Ramesses the Great. Destined to be the most powerful pharaoh in Egypt, he is also the man who must confront the most famous exodus in history.

My Review:
I was thrilled to travel back to ancient Egypt with Moran leading the way in this beautiful novel.  Nefertari is the narrator in this novel and since her aunt, Nefertiti, was known as the infamous heretic queen, her future in the kingdom is questionable.  It is a joy to watch Nefertari develop from the carefree tomboy she once was, into the respectable woman she becomes.

We learn early on in the novel that Nefertari's mother died in childbirth.  We see how lonely life has been for this young girl, growing up in a royal court without any family left, and very few friends.  The current Pharoah does not discount thE fact of Nefertari's royalty, so even though she comes from a line of heretics, she still is allowed to use the title of Princess.

When Nefertari catches the eye of the young Pharoah, the royal court hesitantly accepts her as a wife, while the people of Egypt take a bit longer to acknowledge her favorably.  The people cannot forget that Nefertari is a descendant of the heretic queen, and they feel that if Nefertari is given power, she will lead their country down the wrong path.

Moran did a beautiful job of depicting the time and place for me, allowing me to create vivid and lucid pictures in my mind.  Greed and power were desired just as much in ancient Egypt as it is in our society today.  All the ladies in my book group loved this novel and is one of the only books that we all gave it the highest possible rating.  With themes of love, power, royalty, this is a book that I highly recommend for both personal leisure and book club discussions.

Disclosure:  This book is part of my personal collection and I read it for personal entertainment and as a book club selection.
Posted by Jo-Jo at 7:50 AM

I have heard such great things about Moran's books and I even have one. I really should read it!

Your review has me wanting to get to this book now! I've enjoyed a couple of her books already.

I loved this one, too, along with the other Moran novels I've read.

I don't read a lot of historical fiction but have been told this author is excellent and I would probably enjoy her work. I need to give it a try.