Audiobook: A Prisoner of Birth by Jeffrey Archer 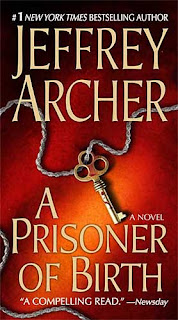 Title:  A Prisoner of Birth

If Danny Cartwright had proposed to Beth Wilson on any other day, he would not have been arrested and charged with the murder of his best friend. But when the prosecution witnesses happen to be a group of four upper-crust college friends—a barrister, a popular actor, an aristocrat, and the youngest partner in an established firm’s history—who is going to believe Danny’s side of the story?

Danny is sentenced to twenty-two years and sent to Belmarsh prison, the highest-security jail in the land, from where no inmate has ever escaped. But Spencer Craig, Lawrence Davenport, Gerald Payne, and Toby Mortimer all underestimate Danny’s determination to seek revenge—and the extent to which his fiancée Beth will go in pursuit of justice.

My Review:
I love listening to books that are full of action and suspense as they usually don't have a problem of keeping my attention.  I can't say that was the case for A Prisoner of Birth though.  I think I even missed a bit of the beginning, although it didn't take long to come to the conclusion that someone was murdered and Danny was being framed for the crime.

Danny is sent to prison for a crime he didn't commit and learns quickly what he must do in order to survive on the inside.  He meets some good friends during his imprisonment and he even makes some decisions that help to shape him into a better person. When certain events happen Danny decides to seize the opportunity and take control of his future.

It is a long road for Danny as he seeks revenge on those that are responsible for his imprisonment.  He takes his time as everything falls into place for him, allowing the true perpetrators to create their own demise.  Once you get to a certain point of this audiobook you can't stop as we need to know how Danny is getting his revenge on these men!

This was an interesting novel that did have me wanting to know how it all turned out, but for some reason did not capture my attention through its entirety.  With themes of love, revenge, and justice, you may enjoy this book more than I did.  I recommend this book to those of you that enjoy crime thrillers.

Disclosure:  I borrowed this audiobook from my friend to listen for my own entertainment.
Posted by Jo-Jo at 7:30 AM