Review: Another Piece of My Heart by Jane Green 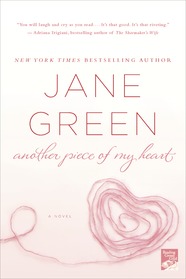 Here is a summary of the book from the author's website:

Andi has spent much of her adult life looking for the perfect man, and at thirty-seven, she's finally found him. Ethan — divorced with two daughters, Emily and Sophia — is a devoted father and even better husband. Always hoping one day she would be a mother, Andi embraces the girls like they were her own. But in Emily’s eyes, Andi is an obstacle to her father’s love, and Emily will do whatever it takes to break her down. When the dynamics between the two escalate, they threaten everything Andi believes about love, family, and motherhood — leaving both women standing at a crossroad in their lives . . . and in their hearts.

My Review:
This was my first experience with Green and I wasn't really sure what to expect.  Our book club won copies of this book and when I was judging the book by it's cover, which I admit to doing quite often, I figured it would be a sappy love story.  Well I can tell you it was far from that.

The book is basically written in two parts.  The first half being told by Andi as she struggles with the troubles of being a stepmother to a young girl that wants nothing to do with her.  Emily is rude and belligerent most of the time, making it hard for Andi to continue reaching out to her.  It becomes more difficult when her husband doesn't support her, but always turns to his daughter at any sign of turmoil.  I definitely understood her frustrations, but by the end of this part it almost took on a whiny tone making me thankful we were done with that stuff.

The second half of the book was told from several perspectives, including the angry, young Emily.  We learn what makes her so angry inside and watch her as she makes wrong decisions that will follow her throughout her life.  We see a part of Emily that makes us want to slap her silly, but we are also lucky enough to watch her accept the cards that life has given her as she develops into a confident young woman.

Families can be messy business, especially when divorce and stepparents are involved.  I think Green did a great job of creating a realistic situation by not holding back any of the gritty nastiness that comes up in life.  Even though most of the gals in my book club didn't enjoy this one as much as I did, it did make for a great evening of discussion.  With themes of love, forgiveness, and family this is a great book for personal leisure or as a book club selection.  I don't hesitate in recommending this novel.

Disclosure:  This book was provided to my group by the publisher to read as a book club selection.

I really liked this book too. I suspect a lot of people these days can relate to it.

I think I'd like this book a lot! I may add it to my list, the one that keeps growing and growing and...

I agree that lots of women and men can put themselves in the characters shoes. Such a lot of tension and frustration in this situation. I'd like to read this one.

I always enjoy Jane Green's books and this one was no exception. Glad you enjoyed this too.

I think you did a great job in choosing a book by it's cover. I think it's so pretty. And the story was good too, hooray!