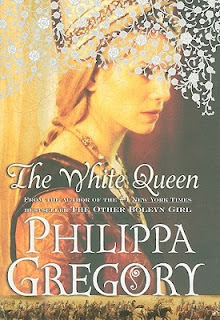 Here is a summary of the novel from the Goodreads website:


Brother turns on brother to win the ultimate prize, the throne of England, in this dazzling account of the wars of the Plantagenets. They are the claimants and kings who ruled England before the Tudors, and now Philippa Gregory brings them to life through the dramatic and intimate stories of the secret players: the indomitable women, starting with Elizabeth Woodville, the White Queen.

The White Queen tells the story of a woman of extraordinary beauty and ambition who, catching the eye of the newly crowned boy king, marries him in secret and ascends to royalty. While Elizabeth rises to the demands of her exalted position and fights for the success of her family, her two sons become central figures in a mystery that has confounded historians for centuries: the missing princes in the Tower of London whose fate is still unknown. From her uniquely qualified perspective, Philippa Gregory explores this most famous unsolved mystery of English history, informed by impeccable research and framed by her inimitable storytelling skills.

With The White Queen, Philippa Gregory brings the artistry and intellect of a master writer and storyteller to a new era in history and begins what is sure to be another bestselling classic series from this beloved author.

My Review:
First of all, let me say I have been burned by the abridged audiobook once again. I requested this book from the local library, picked it up and listened to the entire thing.  It wasn't until I started preparing this post for review that I found the audiobook narrated by Bianca Amato (who was wonderful by the way) was the abridged version.  The unabridged version is actually about 15 hours, and I have to admit that I kind of felt violated in a way.  I didn't even hear half of the story!  Well that's enough of my whining.  I will try to put some thoughts together regarding the abridged version.

Since I listened to The Kingmaker's Daughter first, I already knew the premise of this story, but I got to hear it from the opposing viewpoint this time.  Elizabeth Woodville is the voice of this story and Amato did a fabulous job of taking on her character through narration of the abridged version.  Woodville is a widow with children from her first husband, but that doesn't prevent Edward from becoming enamored with her.  Although rumors spread that a spell was cast on the young man who would one day be king, and it was interesting to read rumors weren't so far from the truth.

The parts of the story about witchcraft were interesting, but I think would have been more enjoyable in the unabridged version.  Many of the events that were blamed on witchcraft in The Kingmaker's Daughter were addressed in this novel.  When I first heard the accusations in the Kingmaker's Daughter I thought they were just silly fears, but when listening to the same events from The White Queen, these events became chilling.

We watch Woodville rise as she becomes queen, and then we see her throne ripped away from her.  She is blessed with many children, from both her first marriage and Edward, but we feel her sorrow when many of her and Edward's children die from sickness or murder.  It was a dangerous life for the children of royalty and they had to go to great lengths for the children's well-being.

This was a great book to listen to and I recall thinking that I wanted to hear more throughout most of it.  Now I know why!  With themes of magic, royalty, and love, this may be a novel you would enjoy also.  I don't hesitate in recommending the abridged version, but I sure do long to hear the unabridged version as well.

Disclosure:  I borrowed this audiobook from the local library to listen for my own entertainment.
Posted by Jo-Jo at 7:30 AM

Wow, they really abridged that one! I wonder what the author thinks about that.