Review: A Lucky Child: A Memoir of Surviving Auschwitz as a Young Boy by Thomas Buergenthal 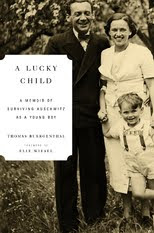 Here is a summary of A Lucky Child from the Hachette website:

Thomas Buergenthal, now a Judge in the International Court of Justice in , tells his astonishing experiences as a young boy in his memoir A LUCKY CHILD. He arrived at at age 10 after surviving two ghettos and a labor camp. Separated first from his mother and then his father, Buergenthal managed by his wits and some remarkable strokes of luck to survive on his own. Almost two years after his liberation, Buergenthal was miraculously reunited with his mother and in 1951 arrived in the to start a new life.

Now dedicated to helping those subjected to tyranny throughout the world, Buergenthal writes his story with a simple clarity that highlights the stark details of unimaginable hardship. A LUCKY CHILD is a book that demands to be read by all.

My Review:
This is a wonderful memoir that Thomas Buergenthal has created that not only gives us a glimpse of what it took for him to survive during such a vicious period of history, but also how these events helped to make him into the man that he is today.  Buergenthal does a great job of sharing how his emotions changed from fear, to anger, and eventually forgiveness once he was able to finally heal.

The title of this book comes from the idea that Thomas' mother truly believed that he was a lucky child because of what a fortune teller told her many years before.  After reading some of the things that Thomas had to endure throughout his ordeal, it is definitely hard to disagree with her.  Isn't it curious that when he was in Auschwitz a boy that he slept with on the same bunk came down with diptheria, while Thomas never showed any symptoms at all?  Considering how young he was and having a low immune system I find this to be a miracle in itself.

Before the Holocaust, Thomas' parents own a beautiful hotel that was very profitable.  When his father learns what the Nazi regime is doing to Jewish families and businesses he decides to sell everything so they will have enough money to live on and hopefully not draw any attention to themselves.  Of course they do not expect the extent of power that the Nazi's will have, because before they know it they have spent all of their savings and find they have no other choice but to move into one of the ghettos.  They are thankful to be around friends again, but eventually realize that they will be taken away to a work camp.

After living at Auschwitz for some time, Thomas does become separated from his parents and will not know for quite some time if they are even alive.  His creativity, intelligence, and wits help him to survive the abuse of the German guards and from being selected by Dr. Mengele for experiments.  How such a young, innocent child could survive these conditions and the Auschwitz Death March is amazing to me...and once again lucky.

Buergenthal admits to us early in this book that there are many events that he does not recall as he decided to write this book very late in his life.  He shares that it may have been difficult to write about his Holocaust experience shortly after it happened and it may have taken him longer to recover.  But his experiences did help to shape him into the person that he has become and be a very active and successful human rights lawyer.

I appreciate how Buergenthal honestly shared his feelings and emotions with us, especially his state of mind after the war was over.  When he was still a young boy and living in liberated Germany he wanted revenge on many of his German neighbors with such a fierce intensity.  He cannot understand how these same people just a couple of years before would not even look at him on the street and now they smile at him as nothing had happened.  Once he is able to deal with his feelings he shares the shame that he felt for the vengeance that he so desparately wanted at that young age.  Here is an excerpt from page 163 where he talks about struggling to stop this vicious cycle:
It took me much longer to realize that one cannot hope to protect mankind from crimes such as those that were visited upon us unless one struggles to break the cycle of hatred and violence that invariably leads to ever more suffering by innocent human beings.

I am so thankful to Thomas Buergenthal for taking the time at this stage of his life for putting together this memoir for us.  Not only does it give us a glimps as to what he had to endure, but also how he dealt with his conflicting emotions.  I could feel the different stages of healing and forgiveness among the pages and this obviously helped him to become the person he was meant to be.  This book includes a map and a few pictures that help you feel a little closer to his family and what a cute young boy he was!  I highly recommend this book!

Disclosure:  This book is from my personal collection and I read it for my own entertainment.

Thanks for the review. I'm always drawn to stories of the Holocaust, especially memoirs. I'll be sure to add this one to my reading list.

Sounds like a wonderful book -- thanks for a great review!

This was a fantastic book-it was unique to hear his experience as a child-as an attorney-I enjoyed the fact that he went on to work in human rights and then on to The Hague.

I know he survived or there would not be a novel-what he did with his life was amazing.

Have you visited Miss Remmers Reviews-she is always looking for guest posts for her students-this would be a great one.

I thought this book was amazing, too.

I have this one on the shelf as well. I'm glad that you enjoyed it, though enjoy may not be the best word here.

Great review Jo-Jo. I've seen many reviews for this book and had it on my wishlist for a long time. I hope to pick it up one of these days. It sounds like a very moving book.

I thought this was a very powerful memoir. We posted your review on War Through the Generations.

Great review, Jo-Jo. I like the excerpt you selected as well. I added your review to mine.