Review: Made in the U.S.A. by Billie Letts 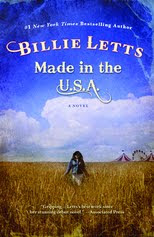 Here is a summary of Made in the U.S.A from the Hachette website:

The bestselling author of WHERE THE HEART IS returns with a heartrending tale of two children in search of a place to call home.

Lutie McFee's history has taught her to avoid attachments...to people, to places, and to almost everything. With her mother long dead and her father long gone to find his fortune in Las Vegas, 15-year-old Lutie lives in the god-forsaken town of Spearfish, South Dakota with her twelve-year-old brother, Fate, and Floy Satterfield, the 300-pound ex-girlfriend of her father. While Lutie shoplifts for kicks, Fate spends most of his time reading, watching weird TV shows and worrying about global warming and the endangerment of pandas. As if their life is not dismal enough, one day, while shopping in their local Wal-Mart, Floy keels over and the two motherless kids are suddenly faced with the choice of becoming wards of the state or hightailing it out of town in Floy's old Pontiac. Choosing the latter, they head off to Las Vegas in search of a father who has no known address, no phone number and, clearly, no interest in the kids he left behind.

MADE IN THE U.S.A. is the alternately heartbreaking and life-affirming story of two gutsy children who must discover how cruel, unfair and frightening the world is before they come to a place they can finally call home.

My Review:
As I started reading Made in the U.S.A, I couldn't help but let a smile cross my face as another tramatic event takes place in the local Wal-mart store.  I love how she always seems to weave the Wal-mart stores into her stories.  Even though the store has a very small appearance, it really sets off a chain of events that will change Lutie and Fate's lives forever.

Lutie and Fate are a brother and sister that have not had the opportunity to live a life full of love and family.  After their mother died years ago, their father seemed to hook up with any single gal that would take him and his two children in, knowing that she would be there to take care of them so he could drink himself into a stupor.  One day when their father doesn't return, it isn't much longer until they realize that he is not coming home at all.

When life-changing events take place, Lutie decides that the only thing left for her and Fate to do is to find their father so he can take care of them.  Their quest takes them to the streets of Las Vegas, which as you can imagine is not the best place for a couple of young kids with no home or money to spend any time.  They find themselves living out of a car and Lutie is doing all that she can to save money to get themselves a reasonable apartment so Fate can at least be enrolled in a decent school.  What she is earning is not enough, and she finds herself having to resort to unimaginable jobs to make the money that is needed.

As Lutie and Fate seem to be just getting by day after day, it appears that they have a secret guardian angel that enjoys leaving them little gifts that are greatly appreciated.  When events take a turn for the worst, their guardian angel comes to their rescue, and while revealing his identity he also saves them from imminent danger.  In the process of saving the children, in a way they are also saving him.  I love how he needed these children to heal his wounds as much as they needed him to heal theirs.

Although I throughly enjoyed this novel, there were pieces that were definitely hard to read.  The hardest part of this book for me was watching these children live in a way that didn't allow them to be children.  With themes of abandonment, growing up, forgiveness, and love, this book will stay in my memory for quite some time.  I feel that I should warn you that there is some offensive language in these pages, but the story itself is well worth the read.

Disclosure:  This book is from my personal collection and I read it for my own entertainment.
Posted by Jo-Jo at 11:07 AM

I won this awhile back but haven't read it yet. Glad to know it's good. I've only read "Where the Heart Is" by Letts, and I liked it a lot.

You've convinced me with your review. I want to read this book now. I haven't read anything by this author so I'm adding her to my list of new-to-me authors.

I'm a fan of Letts' work, but didn't think this one lived up to her others. Don't get me wrong - I enjoyed it, but not as much as her other books.

Anna: Almost everyone that has read Where the Heart Is liked that one much better, but it still was a good story.

Margot: I think you will enjoy this one.

Kathy: I agree with you...I didn't think it was quite as good as Where the Heart Is or The Honk and Holler, but I did like it better than Shoot the Moon.

Hey Jo-Jo, I am just popping in to say HAPPY HOLIDAYS TO YOU AND YOURS! :0)

I enjoyed Where The Heart Is but this one I sort of let fall to the back burner. I think I have outgrown the authors style of writing.

Hey Jo-Jo-
I just want to wish you and yours a Merry Christmas and a happy New Year.

I read this a few years ago-it is a great book.

I loved Where The Heart Is; I can't believe I've never read any more Letts. Looks like this is one to pick up.

I have this one on the shelf and look forward to it after reading your review.

There's a movement to radically change California government, by getting rid of career politicians and chopping their salaries in half. A group known as Citizens for California Reform wants to make the California legislature a part time time job, just like it was until 1966.

There's a movement to radically change California government, by getting rid of career politicians and chopping their salaries in half. A group known as Citizens for California Reform wants to make the California legislature a part time time job, just like it was until 1966.