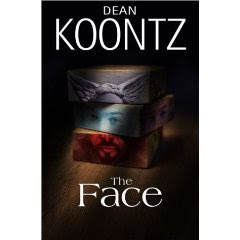 Here is a summary of The Face from the Random House website:

He’s Hollywood’s most dazzling star, inspiring the worship of millions and the hatred of one twisted soul. His perfectly ordered existence is under siege as a series of terrifying “messages” penetrates the security of his legendary estate. All that stands between him and an insidious killer is a weary ex-cop who has already seen his own death.

Enter a world of marvelous invention, enchantment, and implacable intent, populated by murderous actors and the walking dead, hit men and heroes, long-buried dreams and never-dying hope. Dean Koontz takes readers on an unforgettable journey to the heart of darkness and to the pinnacle of grace, with a brilliantly observed chronicle of good and evil in our time, of illusion and everlasting truth.

My Review:
This was another Dean Koontz novel that made quite an intense audiobook.  This book has you questioning from the very beginning whether certain events have actually happened or how one could have such a vivid memory of an incident if it didn't occur.  Ethan Truman is an ex-cop who is now the head of security for the famous Hollywood star, Channing Mannheim.  Ethan finds himself on a journey of unexpainable events after odd packages containing hidden messages start to appear at the actor's home.  These boxes contain strange items from dried up foreskins to scrabble tiles that obviously are meant to be deciphered into a message of dire warning.

Fric is the son of the famous Mannheim actor and may have been my favorite character in this book.  He is such a sweet boy, but yet so lonely and his sarcastic humor just jumps off the page (or radio speakers in my case).  It seemed to me that the staff that worked on the Mannheim estate were more of a family than his father was, as he was hardly ever home.  Fric is aware that impending danger lies in his future when he receives an anonymous phone call informing him that he needs to find a hiding spot in the mansion so he is not captured by the 'beast in yellow'.

Odd things happen to both Fric and Ethan that neither of them seem to understand.  They start to see images appearing in mirrors and other events that they know are not possible within the physical realm that we live.  When the 'beast in yellow' does appear at the Mannheim estate Ethan and Fric find that they will need to get help from each other and other sources in order to persevere from the attack.  In the end they both find themselves surprised, grateful, and in a spiritual state of amazement.

This made an enjoyable audiobook that really brought out emotions of sadness, gratefulness, and terror.  I find it interesting how Koontz can spin a story that includes all of these elements.  I'm not sure if I would have enjoyed reading this one as much as listening to it so this one receives an audio recommendation from me.

Disclosure:  This was an audiobook that I borrowed from the library and listened to for my own entertainment.
Posted by Jo-Jo at 11:19 AM

It's been a while since I read one of his books - maybe I'll dive back in with this one!

This is one of his books that I have been meaning to read for the longest time but something else always gets in the way. Koontz is one of my favorite horror writers and I am glad to see that you enjoyed this one so much.

Some of Koontz's books are too scary for me - I'd probably do better reading this than listening to it, since it wouldn't seem quite so creepy then.

I used to read a lot of Koontz's books and then I stopped for some reason. I think I'll see if my library has this one on audio since you liked it so much. It sure has a pretty cool cover.

I love Dean Koontz but never listened to one of his books. This would be a good one to try on audio. Thanks for your review! I'm getting it from my library next visit!

I am currently reading Lightning by DK and am loving it. I can't get into audiobooks I fall asleep.

I love to listen to audiobooks in the car, but the only problem is if they are exciting or intense I have to sit in my garage (after I've arrived home) & listen longer.

I have never read one of his books, but this review tempts me!

I haven't read a Koontz book in ages. maybe I'll give this one a try.

Sounds good, and sounds like something I should tell a friend of mine to read

I listened to this audio too and agree with you assessment. It was before I started rating books, but 4 feels about right. Koontz is so good at these types of books.

I love Koontz and have never listened to his books on audio. I bet they are fantastic!