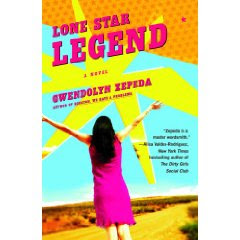 I would like to thank Hachette Book Group for inviting me to participate in the blog tour for Lone Star Legend by Gwendolyn Zepeda.  Here is a summary of the book from the Hachette website:

When Sandy Saavedra lands her dream job with the popular website ¡Latino Now!, she can't wait to write hard-hitting pieces to combat all those stupid Latino stereotypes. While visions of Pulitzers dance in her head, her editor in chief is suddenly laid off, replaced by the infamous Dolores Villanueva O'Sullivan. Dolores has one mission: make ¡Latino Now! an internet phenomenon, no matter how many pandering puff pieces she has to pack onto its pages. Sandy doesn't see how she can keep this job without losing her soul, especially when she's sent to Middle-of-Nowhere Texas to investigate the dumbest legend her people ever created, the Chupacabra.

My Review:
I have always enjoyed books that give me a taste of other cultures and Lone Star Legend not only touched on the hispanic culture, but legends as well.  Before reading this book I had no idea what a Chupacabra was, and for your information here is the definition: a purported creature resembling a gargoyle, said to exist in parts of Mexico and on Puerto Rico.

The main character in this novel is Sandy, an aspiring writer who happens to live in an apartment above her mother's garage.  Life doesn't seem too difficult for Sandy, as the rent is very low so she doesn't have many expenses.  She also has a decent job as a writer on a website and a boyfriend who happens to be a writing professor at a nearby college.  If only her boyfriend could look past his own aspirations and find some respect for the work she does, she would be much happier with that relationship.

After Sandy's aunt passes away, the opportunity arises for Sandy and her mother to take a little roadtrip to Aunt Linda's home to take care of some housekeeping items.  They arrive to find that basically everything has been taken care of by Linda's neighbor Jaime.  This becomes the first of many visits that Sandy will make to Jaime as they develop a lasting friendship.

When Sandy returns to her job she finds that she has a new boss and the company has decided to change the way they operate.  They are basically turning their website into an outlet for gossip and trashing the latino celebrities.  Although Sandy finds this type of assignment a struggle, she does find a way to persevere and deliver the type of articles that her boss is looking for.

Trouble starts to brew for Sandy as she becomes one of the more popular authors on the website.  Up until she became a celebrity of some sort, she maintained a blog in which she was able to retain complete anonymity.  After a couple of hints about her blog were dropped by a close friend her identity was revealed and her personal information that she shared on her blog was available for the whole public to see.  Some things that she wrote about on her blog she wouldn't have otherwise shared with anyone knowing that she would remain anonymous.  This was obviously a humbling experience for Sandy that changed her outlook on how she was living her life.

I found myself enjoying this story that had themes of forgiveness, starting over, and making the right choices in life.  I think that those of us that have a blog can easily understand how things could get so quickly out of control if you don't monitor your posts.  This was a fun book to read that besides the story itself, also included posts and comments from both the website Sandy worked for and her personal blog.  A reading group guide is provided at the end of the book and I think it would make an entertaining group discussion.  Be sure to stop by later today if you are interested in winning a copy of this book for yourself.

Disclosure:  This book was provided to me from Miriam of Hachette in exchange for an honest review.
Posted by Jo-Jo at 8:09 AM

It does sound like a good book.
Great review!

I seen this on another blog too and they also enjoyed it. Good review!

I've given you an award!

thanks for always being there!
http://bookblabbing.blogspot.com/2010/01/sweet-award.html

I enjoyed this book, too, even though I thought I was a little bit old for it. I did think it had a great message.