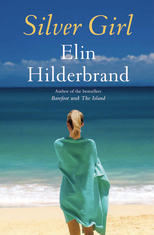 Here is a summary of Silver Girl from the Hachette website:
Meredith Martin Delinn just lost everything: her friends, her homes, her social standing - because her husband Freddy cheated rich investors out of billions of dollars.

Desperate and facing homelessness, Meredith receives a call from her old best friend, Constance Flute. Connie's had recent worries of her own, and the two depart for a summer on Nantucket in an attempt to heal. But the island can't offer complete escape, and they're plagued by new and old troubles alike. When Connie's brother Toby - Meredith's high school boyfriend - arrives, Meredith must reconcile the differences between the life she is leading and the life she could have had.

Set against the backdrop of a Nantucket summer, Elin Hilderbrand delivers a suspenseful story of the power of friendship, the pull of love, and the beauty of forgiveness.

My Review:
This is the second Hilderbrand novel that I have listened to as an audiobook, so can I just start by saying that I really would love to spend a summer vacation in Nantucket!  Whether her characters are living in a beautiful mansion or a rustic cabin, Hilderbrand brings out the dynamics of family and friends in a way that makes my heart yearn for more.

Meredith and Connie had a rift in their friendship years ago, but when Meredith finds she has no-one else to turn to, she takes a chance by escaping from her trauma with the only person that hasn't shunned her.  As Connie is getting ready to spend the summer in her beautiful Nantucket home, she invites Meredith to join her.  Since Connie has still been mourning the loss of her husband, she is nervous about all the publicity that could come along with her new roommate so they try to keep Meredith's presence known from as many people as possible.

There is still tension between Meredith and Connie as their broken friendship never really had a chance to recover earlier on.  While both of these women are dealing with their own demons and issues, they must once again learn to trust and confide in each other so they both can move on with their lives.  The men they both loved and trusted have been ripped away from them and it seems that they need to come to terms with their lives and friendship before they can open their hearts again.

As both of these women come to terms with their lives, we find out exactly how they got to the place that has caused so much turmoil.  Meredith recalls periods of her life with Freddy and even though she fell in love with him, she slowly learns that most of Freddy's attention to her was just a front to get him further ahead with his investors.  Connie misses and loves her husband, but she can't seem to stop blaming herself for his death and the fractured relationship that she has with her daughter.  Since Meredith and Connie both feel alone in their misery they really do not have any other choice than to seek comfort from each other.

I love novels that show how important it is to have strong female relationships.  With themes of love, friends, heartbreak, and loss this novel really does have a lot to offer.  And within the story Connie even gives Meredith a couple of cooking lessons that leave you salivating!  I would have loved to read this book while lounging on a beach somewhere, but I also think it would make a great book club selection.

Disclosure:  This audiobook was provided to me by the publisher in exchange for an honest review.
Posted by Jo-Jo at 8:04 AM

I really enjoyed this book too. I'll add your review to the Reagan Arthur Books Challenge blog.

Nantucket sounds like a wonderful setting. Your comment about the mouth-watering descriptions of the cooking lessons also caught my attention!

I just love Elin and her writing style...I'm with you...Nantucket is definately on my list of places to visit someday! Maybe a girlfriend trip???? Great review!!

I'm pretty sure this will be my next audiobook, so I didn't want to read your review too closely. I'm really glad to see that you gave it 4 stars, though. Hope I like it as much as you did!

Great review. It looks like we both enjoyed this book for the same reasons! I also want to summer on Nantucket. . . and enjoy some of Connie's cooking. The descriptions of her great meals made me hungry!