Review: The Help by Kathryn Stockett 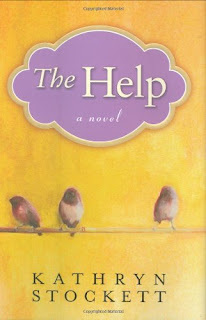 Here is a summary of the book from Kathryn Stockett's website:

Three ordinary women are about to take one extraordinary step.


Twenty-two-year-old Skeeter has just returned home after graduating from Ole Miss. She may have a degree, but it is 1962, Mississippi, and her mother will not be happy till Skeeter has a ring on her finger. Skeeter would normally find solace with her beloved maid Constantine, the woman who raised her, but Constantine has disappeared and no one will tell Skeeter where she has gone.

Aibileen is a black maid, a wise, regal woman raising her seventeenth white child. Something has shifted inside her after the loss of her own son, who died while his bosses looked the other way. She is devoted to the little girl she looks after, though she knows both their hearts may be broken.

Minny, Aibileen's best friend, is short, fat, and perhaps the sassiest woman in Mississippi. She can cook like nobody's business, but she can't mind her tongue, so she's lost yet another job. Minny finally finds a position working for someone too new to town to know her reputation. But her new boss has secrets of her own.

Seemingly as different from one another as can be, these women will nonetheless come together for a clandestine project that will put them all at risk. And why? Because they are suffocating within the lines that define their town and their times. And sometimes lines are made to be crossed.

In pitch-perfect voices, Kathryn Stockett creates three extraordinary women whose determination to start a movement of their own forever changes a town, and the way women--mothers, daughters, caregivers, friends--view one another. A deeply moving novel filled with poignancy, humor, and hope, The Help is a timeless and universal story about the lines we abide by, and the ones we don't.

My Review:
This was such a wonderful story and I am so glad that I waited to read it as a book club selection, because I know that all of the ladies loved this novel so it is sure to be an eventful evening!  The story is told from the perspective of three different women in Jackson, Mississippi, when segregation in other parts of the United States is coming to an end, it is alive and in full force in Jackson.

Miss Skeeter is one of our narrators who is an aspiring journalist that recently finished her college education.  A small door is opened for Miss Skeeter as she is offered to write a column for the local newspaper.  Although this is a step in the right direction she has so many more dreams for her writing career.  She just doesn't think those dreams will ever be realized if she can't ever get out of Jackson.  Skeeter has more liberal views than most of her family and friends so quite often she finds herself not being invited to social gatherings and before you know it is considered an outcast.  Her friends' attitudes help to spark the idea for a project that will get out the stories of the negro population in Jackson that will show the truth to the entire country.

Aibileen is a maid that works for a close friend of Skeeters and happens to be the first person that Skeeter turns to for help in her project.  Knowing that they could get in a heap of trouble Aibileen is hesitant to become involved in this endeavor as people have been beaten and killed for doing things much less threatening.  Aibileen is a strong woman with an amazing heart who lives alone as her son was killed in a terrible accident years ago.  I don't think that anyone could help but love Aibleen's character.

Minny is another maid who is also a good friend of Aibileen's.  Minny is another fabulous character who is an amazing woman but cannot seem to hold onto a job because her sassy mouth usually intervenes.  She is a hoot as she just tells things like they are.  Minny is especially nervous about helping out Skeeter as most of Jackson already has her blackballed because of her behavior.

There are some strong women that really put themselves out there for a cause that they truly believe in.  Skeeter earns the confidence of not only Aibleen and Minny, but also many of their friends.  As Skeeter makes choices both about her project and where her life is leading, she cuts herself off more from her lifelong friends.  Before you know it the only friends that Skeeter has left are the women that are helping her with her project.  Everyone else has deserted her, which only gives her more courage to do what she is doing.

This book gives us a glimpse of what it was like for the negro population during this difficult time for our country.  We are all human beings and no-one deserves to be treated like a second class citizen.  With themes of civil rights, courage, and friendship this book has so much to offer.  I honestly believe that every book club out there, male or female, young or old, should read this novel as it has something to offer for everyone!  I highly recommend this novel.

Disclosure:  This book is from my personal collection and I read it for my own entertainment.

You can read more great book reviews over at Cym Lowell's Book Review Party Wednesday!
Posted by Jo-Jo at 7:07 AM

It was very revealing to those of us not familiar with the south before Civil Rights. I enjoyed the movie.

Great review Jojo. I loved the movie. Maybe your book club should also watch the movie and discuss differences etc.

I would recommend The Secret Life of Bees to you also.

I agree. I think everyone should read this one. My bookclub read and loved it!

I have this book but haven't read it yet. It sounds really good, and I must admit I'm very curious about it with all the controversy that has emerged since the movie release. Great review!

I loved this book and the movie too.

This one was resoundingly popular with my book club. We read it over a year ago but recently had a night out to see the movie.

I loved this book! It was wonderful!!

I loved The Help! I'm so glad you enjoyed it. I also enjoyed the movie version.

Loved the movie; loved the book; loved your review:)

Honestly, I really need to read this book!

I think I'm the only one on the planet who hasn't read this book. And my husband said no way to the movie! (I don't blame him.)

I really want to read this book before seeing the movie. I don't think I've run into anyone who didn't like it. Great review!

I have yet to read this one. I wonder if the hubbub about the inaccuracies is just overblown and people should remember its just fiction. I have it on the shelf, so I'll get to it someday!

I saw the movie and loved it. Not sure if I'll pick up the book or not.

Well written. I could see the characters, hear their accents, feel their emotions. However, I don't like having to write a review before I can finish the book.