Audiobook Review: To Be Sung Underwater by Tom McNeal 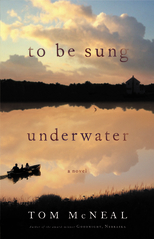 Judith Whitman always believed in the kind of love that "picks you up in Akron and sets you down in Rio." Long ago, she once experienced that love. Willy Blunt was a carpenter with a dry wit and a steadfast sense of honor. Marrying him seemed like a natural thing to promise. But Willy Blunt was not a person you could pick up in Nebraska and transport to Stanford. When Judith left home, she didn't look back.

Twenty years later, Judith's marriage is hazy with secrets. In her hand is what may be the phone number for the man who believed she meant it when she said she loved him. If she called, what would he say?

TO BE SUNG UNDERWATER is the epic love story of a woman trying to remember, and the man who could not even begin to forget.

My Review:
When this audiobook starts out, it seems that Judith is unhappy with the direction that her life has taken her.  She appears to have a beautiful family after marrying her college sweetheart and having a lovely daughter.  But after suspecting that her husband is having an affair she can't help but wonder if she passed up her one chance for true love long ago.

Although this story takes place in present day, Judith reflects back on her teenage years when she met young Willy Blunt.  We find out how her relationship with her parents helped to shape her into the person that she has become.  After her parents divorce, Judith seems to lose touch with her mother when it seems that living with her father would be in her best interests.

It is during the time that Judith is living with her father when paths cross with Willy.  They fall in love at such a young age and while Willy seems to already have a life for himself in a small town, Judith is thinking about college and where that life may take her.  She just isn't sure if she can live with herself if she doesn't move forward to a prospective future.

I don't want to give any more of this audiobook away, but I will tell you that Judith was not happy with the person that she has become.  It seemed to me that she even tried to reinvent herself, which was a part of the story that I just did not understand and found a bit unnecessary.  But Judith finds that she must confront her past and accept the decisions that she has made in order to move on with her life.

This audiobook was narrated by Susan Boyce, who I feel did not attribute much to the story itself.  As I was listening to the story I thought to myself several times that this may be a book that I would have enjoyed actually "reading" rather than listening to.  Overall I did enjoy this novel with themes of true love, secrets, and family obligations.

This books sounds really good to me. I love it when a story centers around an established family and doubt over choices made in the past. Conflict. Love it.

I have this in print and after reading your review, I'm glad.

I bought a copy of this book at Borders when it was going out of business. I've heard really good things about it, and so was sad to see that the audiobook wasn't your favorite (but then again, glad that I have it in print). :)

Thanks to Saturday's workshop, I added three new followers this weekend. I really enjoyed the workshop and didn't want it to end.

Your blog is neat. I'm so impressed with the amount of books you read and post reviews on. That's got to take a lot of time. I read alot but don't get around to writing reviews. Writing reviews takes away from reading time. :)

I like this book's title. "To Be Sung Underwater" piques my interest, although it sounds like maybe this book would be better to read than to listen to.

This sounds beautiful - thanks for the review!

I would agree that a narrator can make or break an audio. Sounds like that might have been the case with this book. The idea of it sounds promising. I bet most of us have similar thoughts at some point in our lives.

I have the physical book on my shelves. Maybe it will be better :)

The story flips back and forth between the present and the years before when she first met Willy. The story flows easily between the two time periods and you can easily get a feel for how Judith has matured. She has a dream job editing films, a lovely home and a man she thinks might be cheating on her. The drama builds effortlessly and the words are so lovingly chosen that you won't want to skip a one. I had to go back and read several paragraphs over since the writing is just so exquisite.